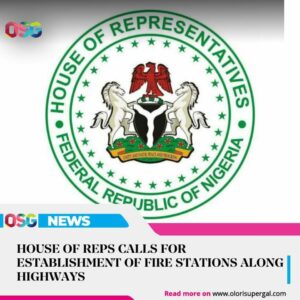 The House of Representatives has called for the establishment of fire stations along the federal highways across States in Nigeria.

The House urged the Federal Road Safety Corps and the Federal Fire Service to align and establish fire stations on all federal highways “to ensure prompt rescue during fire accidents on the roads.”

The lawmakers also urged the FRSC to increase supervision on trucks transporting petroleum products as well as other highly flammable products “to avoid overloading and to ensure compliance with safety standards, to prevent and reduce accidents that have the potential of resulting in explosions on the highways.”

These resolutions were sequel to a motion raised by Taiwo Oluga, titled ‘Need to Establish Fire Fighting Quick Response Station on Federal Highways Across the Country,’ which was unanimously adopted at the plenary on Wednesday.

Oluga said, “The House observes that despite efforts of the Federal Government, accidents still occur on the highways, some of which lead to fire explosions that result in the loss of lives and properties.

“When such ghastly accidents which lead to fire explosions occur, there is often no quick response from the firefighting or road safety agency as they mostly do not have firefighting equipment handy on the highways.

“The House is aware that on 22nd June 2021, many vehicles were burnt beyond redemption after a tanker laden with fuel burst into flames on Ogere axis of the Lagos-Ibadan Expressway, leading to loss of lives and properties and resulting in terrible traffic gridlock due to lack of equipment to put out the fire and evacuate the debris from the federal highway.”

The lawmaker also recalled a report on October 26, 2019, that over 153 Nigerians died as a result of fuel tanker accidents between January and October 2019.