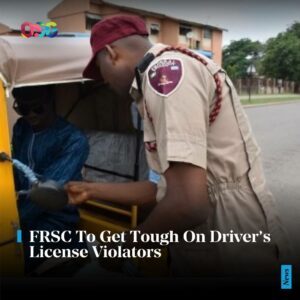 The Federal Road Safety Corps have disclosed that it will start to take tough actions on driver’s license violators and also vehicles without speed limiting devices.

Corps Marshal, Dr. Boboye Oyeyemi, issued the order, in reaction to the rising cases of speed-related road crashes and fatalities.

In a statement issued on Sunday, the Corps Public Education Officer, Assistant Corps Marshal Bisi Kazeem, said that Oyeyemi has directed Commanding Officers across the country to intensify special operations targeted at the offenders. This is with the ongoing operation sanity aimed at restoring sanity to the nation’s highways.

According to the statement, the Corps Marshal, expressed dismay over continuing incidents of fatal crashes, caused by speed violation with most of the drivers failing to install speed limiting devices in their vehicles despite repeated warnings.

Kazeem, further noted that records of road traffic crashes across the country as collated by the Corps since the beginning of the year indicated sadly, that over 50 per cent of such crashes were attributed to speed violations.

37 Students Graduate With First Class in ...