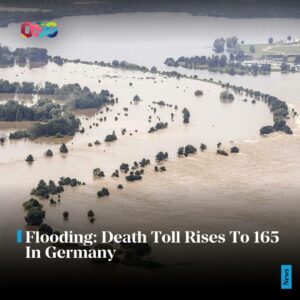 As emergency services, continue to comb through decimated towns, in search of people still missing in Germany, the death toll have increased to 165 on Monday.

The heavy rains, over western Germany in the past week, sent torrents of water, rushing down streets, sweeping away trees, cars and sheds, and destroying houses.

Many victims have been found dead in sodden cellars after attempting to retrieve valuables, while others were swept away by the sheer force of the water.

Emergency workers have been out in force to assess damaged buildings, clear debris and restore gas, electricity and telephone services.

In some areas, police have deployed speedboats and divers to retrieve bodies.

Heavy rainfall has also battered southern Germany, as well as Belgium, Switzerland, Luxembourg, the Netherlands and Austria in recent days.

At least 31 people have died in Belgium.