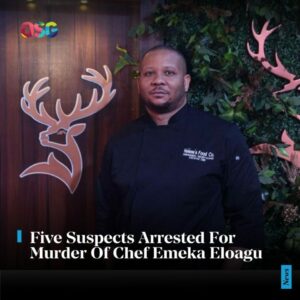 At least five suspects have been arrested in connection with the murder of famous Nigerian chef Emeka Eloagu.

According to sources from The Punch, the suspects have been transferred to the Homicide Unit of the State Criminal Investigation Department.

Eloagu, was found dead in his home in Katampe extension, Abuja, on Sunday.

A close friend to the deceased identified as Ken Okechkwu, said that it was impossible for the assailants to gain access to Eloagu’s apartment without being cleared by security men.

According to him, Eloagu just returned to Nigeria from Dubai before he was murdered. He also said those who carried out the act were people known to him.

He futher debunk claims that the perpetrators were masked. He said Eloagu’s wife had gone for a church programme, after which two men visited him in his apartment.

However, by the time his wife returned, she saw him lying on the floor, after which he was rushed to the hospital, but confirmed dead on arrival.