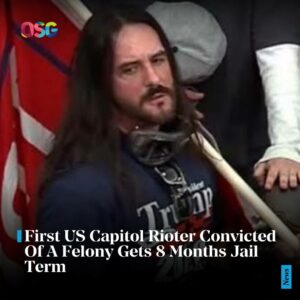 A 38-year-old Floridian man, who pleaded guilty to breaching the Senate chamber, during the US Capitol insurrection was sentenced on Monday, to eight months in prison.

The case, which was closely watched, could influence how hundreds of other rioters charged with the same felony are punished.

Paul Hodgkins, is now the first Capitol rioter convicted of a felony to be sentenced. He pleaded guilty last month to obstructing congressional proceedings — specifically, the counting of the electoral votes, which he helped delay on January 6.

He spent about 15 minutes inside the Senate chamber, wearing a Donald Trump shirt and carrying a Trump flag.

The sentence is far less than the 1.5-year prison term that the Justice Department requested.
At the hearing, prosecutors argued that 1.5 years would deter future political violence and send a strong warning to “people who may be contemplating a second act” after January 6.