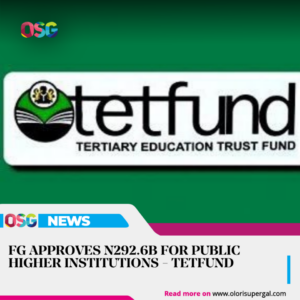 The Federal Government has approved N292.66 billion for disbursement to some public universities, polytechnics, and colleges of education (CoEs) across the country.

He said the intervention, which has Federal Government’s approval, would be spread to higher institutions in each of the six geo-political zones in the country.

He stressed the need to complete the national headquarters of the National Library of Nigeria, which he said the Federal Government had handed over to the fund.

He also said the library project represented an important national asset that should not be ignored due to funding challenges.

The TETFund boss further stressed the essence of research to national development. He said the administration of President Muhammadu Buhari had been consistent in approving funds to see that academics produce quality researches that would address emerging challenges bedeviling the country.

He said this accounted for the setting up of the National Research Fund, which has increased from N3 billion to N8.5 billion in recent times.

Expressing delight that Nigeria was moving closer to having a National Research and Development Foundation, Bogoro urged academics in the country to turn around the fortunes of the country through cutting-edge researches.