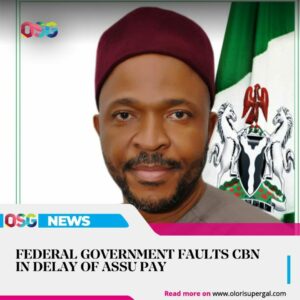 The Minister of State for Education, Emeka Nwajiuba, has pleaded with the Academic Staff Union of Universities (ASUU) not to embark on a fresh strike, following the threat the union issued to the federal government on Monday, 30th August 2021.

The minister stated that the reason why ASUU hasn’t received monies as promised in 2020 before the last strike was called off, is because bureaucracy at the Central Bank of Nigeria (CBN) is delaying the disbursement.

In March 2020, ASUU commenced a nine-month strike that paralysed public universities in the country.
The lecturers had gone on strike following their disagreement with the government over the funding of the universities and ineffectiveness and discrepancies around the Integrated Payroll and Personnel Information System, among others.

However, ASUU, developed the University Transparency and Accountability Solution to replace the IPPIS and had several meetings with officials of the ministries of finance, education, labour and employment, and the Office of the Accountant General of the Federation before the UTAS was approved, but it has yet to be implemented.

On 2nd August, the Minister of Labour and Employment, Chris Ngige, said the government had paid the revitalisation fund as contained in the Memorandum of Action signed with the lecturers.

Nwajiuba, in an interview with The PUNCH on Monday, said the government was working hard to secure the release of the money from the CBN and appealed to ASUU to be patient.

In response to the allegations by ASUU that federal government officials have not been picking calls, Nwajiuba said, “Why won’t the federal government take their calls? You called me with an unknown number and I picked your call, so why won’t we pick calls from ASUU? Who did they reach out to?

“Talks on the funds for the revitalisation of universities and ASUU are in progress.”

However, in its response, ASUU President, Prof Emmanuel Osodeke, said, “I don’t think they are honest with what they are saying. If they are interested in the children of the poor, who cannot afford private universities, they would have written to us that they are sorry. This is the normal thing they should have done in a system.

“The CBN and the ministry are the federal government. They showed us a document that the money is with the CBN. What is difficult in transferring money from one CBN account to another CBN account? That means the document they showed us was fake.”

He further accused the federal government that “They are not showing goodwill on the issue we are talking about. This is about Nigerian students; about 95 percent of Nigerian students are in public universities; only about five percent are in private universities and abroad; so, they should take care of these children.”

Osodeke also said the union would continue to watch the Federal Government until the ultimatum it earlier issued elapsed.

He added that the union’s decision would be made known on Tuesday, 31st August 2021.