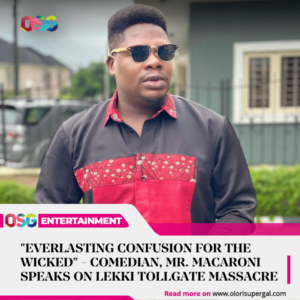 Nigeria Comedian, Debo Adedayo better known as Mr. Macaroni reacted after the reports from the Judicial Panel on the Lekki tollgate massacre were presented to the Lagos State Government, Babajide Sanwo-Olu.

On his verified Twitter page, Mr. Macaroni analysed some vital points about the protest

He said, “The same panel that the government set up has presented their findings. Except you people don’t have faith in your own Judicial system.

Since last year, we have seen numerous gaslighting and lies”.

He also highlighted the confusion among the people saying there was no massacre.

He said, “Go and check the statements of Government reps or their supporters. It’s from one lie to the other. Now they are fighting themselves. Everlasting confusion for the wicked.”

Read what he said below,