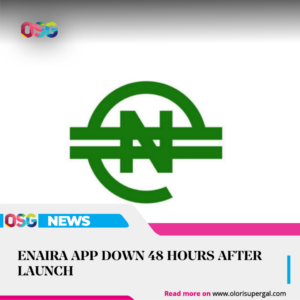 The Central Bank of Nigeria has said it will not bear any liability for any interruption, loss of revenue, or loss of services arising from the use of the eNaira website.

This comes after the eNaira speed wallet disappeared from the Google Play Store on Wednesday after over 100,000 users had downloaded it.

The development came about 48 hours after the eNaira app was launched by President Muhammadu Buhari, at the State House, Abuja.

According to him, the digital currency will help move many more people and businesses from the informal into the formal sector, thereby increasing the country’s tax base.

However, on Wednesday, barely about 48 hours after the launch, the eNaira wallet was removed from the Google Play Store.

The spokesperson for the CBN, Mr. Osita Nwanisobi, said the development was to enable the app to be upgraded.

“There is an upgrade going at the moment by Google; try in the next few hours,” Nwanisobi told one of our correspondents on Wednesday when asked to explain why the app could not be found on the play store.

On the CBN’s eNaira website, www.enaira.gov.ng, the apex bank warned users that it would not be held liable for the loss or corruption of data.

The limitation of liability read, “In no event will the CBN or its directors, officers, employees, independent contractors, affiliates or agents, or any of its or their respective service providers, be liable to you or any third party for any use, interruption, delay or inability to use the eNaira website, lost revenues or profits, delays, interruption or loss of services, business or goodwill, loss or corruption of data, loss resulting from system or system service failure, malfunction or shutdown, failure to accurately transfer, read or transmit information, failure to update or provide correct information, system incompatibility or provision of incorrect compatibility information or breaches in system security, or for any consequential, incidental, indirect, exemplary, special or punitive damages, whether arising out of or in connection with the use of the eNaira website.”

Meanwhile, it was observed that although the eNaira speed wallet had disappeared from the Google Play Store, the eNaira merchant wallet, which is designed for businesses, was still running as of 9 pm on Wednesday and had over 10,000 downloads.

Checks on the Apple App Store showed that the eNaira speed wallet was still active but had been upgraded.

To access the eNaira, users have to download the ‘speed wallet’, which allows them to conduct transactions with speed and ease. It is a digital storage that holds the eNaira and is held and managed on a distributed ledger.

Before it disappeared, the speed wallet had a rating of 2.0 from 2, 150 reviews as of Tuesday evening with many complaining of glitches.

Meanwhile, the CBN has warned Nigerians to beware of some fraudulent individuals using a Twitter handle, @enaira_cbdc purported to belong to the bank to spread false information.

The apex bank, in a statement on Wednesday, explained that the impostor handle was posting messages related to the eNaira with the intent of wooing unsuspecting Nigerians with claims that the CBN was disbursing the sum of N50bn eNaira.

It read in part, “Following the formal launch of the eNaira on Monday, October 25, 2021, the attention of the CBN has been drawn to criminal and illegal activities of some individuals and a fraudulent Twitter handle, @enaira_cbdc purported to belong to the Bank.

“The impostor handle and fraudulent persons have been posting messages related to the eNaira with the intent of wooing unsuspecting Nigerians with claims that the Central Bank of Nigeria, among other falsities, is disbursing the sum of 50bn eNaira currency.