The Senator representing Kogi West, Dino Melaye who has just escaped while arrested, has claimed that he is being denied access to his family, lawyers and food. He was earlier arrested by Nigeria Immigration services in connection with supplying arms to criminals. 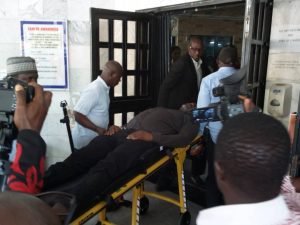 Melaye is currently on admission at the National Hospital in Abuja after sustaining injuries while trying to escape from the police.

The police were driving him to court in Kogi, when he jumped out of the vehicle.

Writing via his Twitter handle on Wednesday night, the Senator said some of his relatives, as well as his driver, have been in police custody since Monday.

“Samuel Melaye, Moses Melaye, Pastor Obalemo, my driver Folorunsho, one of my lawyers and seven others arrested since Monday by the police still in detention by the police.

“Melaye is at the intensive care unit of the national hospital. Trauma section

“Denied access to my lawyers, family members and food for the past more than 24hours,” Melaye tweeted.