Did You Know? Mary Elizabeth Anderson Invented The Windshield Wiper 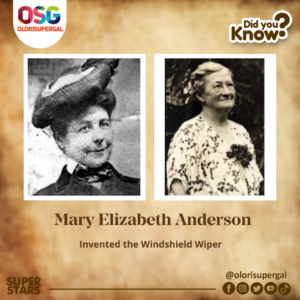 She was born in Burton Hill Plantation, Greene County, Alabama, in 1866. Her parents are John C. and Rebecca Anderson.

Anderson had a sister, Fannie. In 1870, their father died and they were able to live on the proceeds of his estate.

In 1889, she moved with her widowed mother and sister to the booming town of Birmingham, Alabama, where she became a real estate developer.

However, in 1893, Anderson left Birmingham to operate a cattle ranch and vineyard in Fresno, California. She later returned to Birmingham in 1898, with her family.

In 1903 during winter, Anderson visited New York. She sat in a trolley car on a frosty day and observed that the trolley car driver struggled to see past the windows because of the falling sleet.

Though the trolley car’s front window was designed for bad-weather visibility, its multi-pane windshield system worked very poorly. To clear the sights, the driver needed to open the window, lean out of the vehicle, or stop the car to go outside and wipe the windscreen with his hands.

Anderson identified the problem drivers simply accepted and dealt with, and envisioned a windshield wiper blade that could be operated from the inside by the trolley driver.

On her return to Alabama, she hired a designer for a hand-operated device to keep a windshield clear and had a local company produce a working model. Her device consisted of a lever inside the vehicle that controlled a rubber blade on the outside of the windshield.

The lever could be operated to cause the spring-loaded arm to move back and forth across the windshield.

The device could be easily removed if desired after the winter was over. Although similar devices had been made earlier, Anderson’s was the first windshield clearing device to be effective.

Anderson’s simple mechanism and basic design have remained the same. However, today’s windscreen wipers’ significant difference is that Anderson’s wipers could have been removed when not needed.

It is noted that at the time her patent was granted, cars were not popular.

She tried to sell the rights to her invention through a noted Canadian firm of Dinning and Eckenstein in 1905, however, rejected her application. They argued, “we do not consider it to be of such commercial value as would warrant our undertaking its sale.”

Others failed to see the value of her invention and stressed the risk that the driver would be distracted by operating the device and the moving wipers.

After the patent expired in 1920 and the automobile manufacturing business grew, windshield wipers using Anderson’s basic design became standard equipment in 1922. She never made any money from her invention.

Cadillac became the first car manufacturer to adopt them as standard equipment.

Anderson was never married and didn’t have any children; she died on 27th June 1953 at the age of 87.

In 2011, Anderson was inducted into the Inventors Hall of Fame.