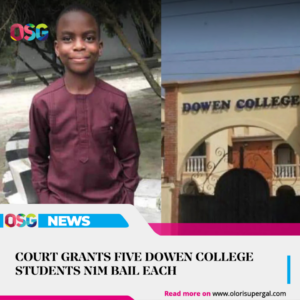 The five students of Dowen College who were charged with conspiracy and homicide by the police have been granted bail by a Chief Magistrates’ court in the Yaba area of Lagos State.

According to the News Agency of Nigeria, the court granted the students bail in the sum of N1 million each.

The minors have been remanded in a juvenile home since 9th December over the death of their schoolmate, Sylvester Oromoni.

Chief magistrate Olatunbosun Adeola, who heard the bail application, ordered the defendants to produce two sureties each in like sum.

The magistrate stated that one of each of the defendants’ sureties must be their parent, who must swear an affidavit of compliance.

Adeola ordered the defendants to submit their travel passports to the court and their residence be verified by the prosecutor, adding that they must be within 2km of their residence at all times.

On Saturday, the police had released Oromoni’s remains to his family for burial after an autopsy was conducted to ascertain the cause of his death.

The 12-year-old’s death had generated outrage after the reports of his assault in the hands of five of his senior colleagues went viral on social media.

His father, Sylvester Oromoni Snr, had alleged that the Junior Secondary School 2 pupil died from the injuries sustained during the assault.

However, the school claimed he died from injuries sustained during a game of football within the school premises.

The family had demanded a coroner’s inquest into Oromoni Jnr’s death while the Lagos State Commissioner of Police, Hakeem Odumosu, had said that some students have been arrested for the alleged assault.