Mother of comedian, Oluwadolarz, whose real name is Ogunleye Olamide Babatunde, give thanks to God after her son survived a car accident. 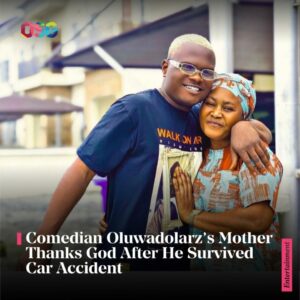 According to reports, the comedian crashed his white Lexus Salon car. Although he escaped the auto crash with bruises on his hand and head but the car was seriously damaged.