Chris Brown was arrested in Washington D.C. this morning for FELONY assault after allegedly attacking a man outside a hotelAccording to TMZ  Report;

Law enforcement sources tell TMZ … Brown got into an argument with a man outside the W Hotel on  K Street and allegedly punched him once IN THE FACE.   We’re told the man Chris struck never threw a punch.   Sources say Chris and the alleged victim did NOT know each other.
The incident  occurred at about 4:30 AM.

Chris was with his bodyguard, and we’re told he was also arrested.

Our law enforcement sources say Brown did not appear to be under the influence of anything at the time of the incident.

Brown is currently in custody.  As for the other person, we’re told he’s being evaluated at a D.C. hospital.  Sources say he’s claiming injury.

Brown is still on probation in the Rihanna beating case and this could be grounds for violating his probation — which means he could be sentenced to prison for nearly 4 years … worst case scenario for him.

Before the incident, Chris had been hosting a party (pic below) at the nearby Park and 14th nightclub. 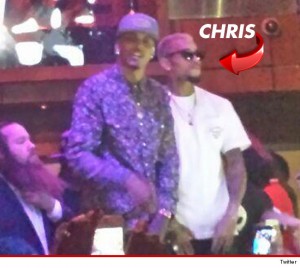