When is a bank not a bank? That is a question Segun Agbaje, the multiple award-winning CEO and Managing Director of Nigeria’s Guaranty Trust Bank (GTBank) has been getting to grips with as he forges a new path for banking in Africa.

Agbaje was always destined to become a banker, it seems, although he took a circuitous route. Initially, he quali?ed as an accountant and practised in the US before tiring of auditing and returning to Nigeria to follow his father’s footsteps into banking. There, in 1991, he joined an exciting new venture, the Guaranty Trust Bank, founded by a group of young Nigerians the previous year.

As he worked his way up through positions of increasing responsibility, several events in which Agbaje played a leading role shaped his thinking about GTBank’s future: the initial public o?ering in 2004, listing on the Lagos stock exchange; entering the international capital markets with a Eurobond issue and listing on the London Stock Exchange in 2007.

“Those transactions exposed me to the international ?nancial markets and the people who worked in them – merchant banks, investment bankers, lawyers, investors,” he says. “It gave me a better understanding of what people wanted from a ?rst-class bank and best-in-class practices. It also encouraged me to think about the bank as an international institution, rather than just a Nigerian institution, and what it took to compete in the global economy.” 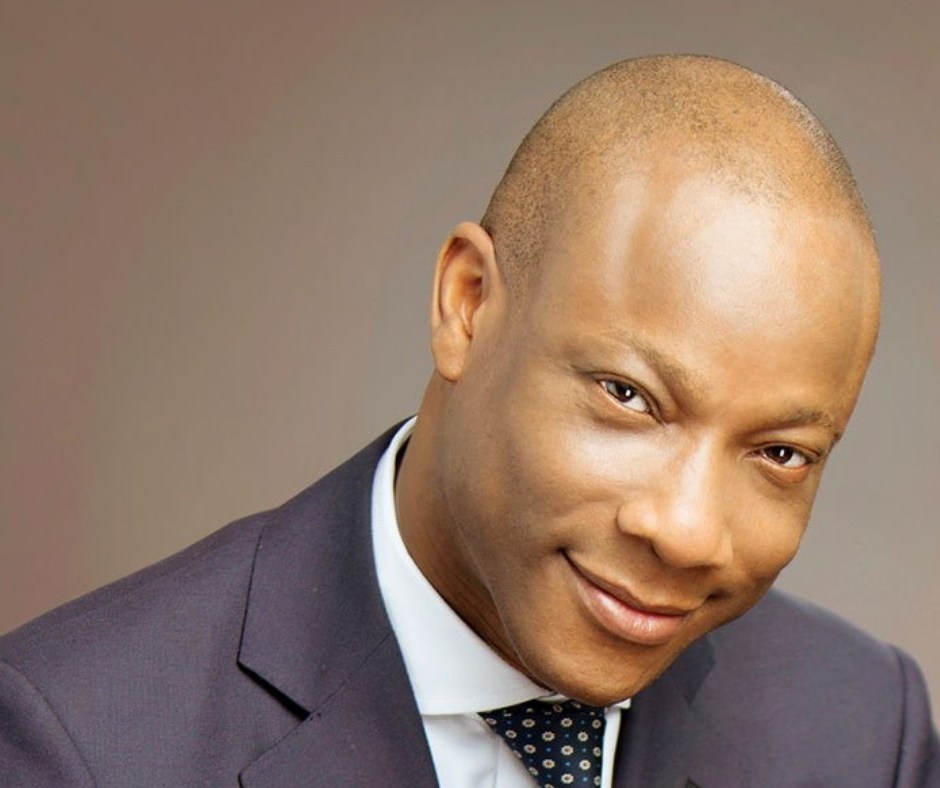 Agbaje became CEO of GTBank in 2011 and won the coveted African Banker of the Year award the next year. The award recognises ?nancial industry leaders throughout Africa who have exercised “good vision and leadership” in guiding their organisation to strong ?nancial performance, as well as having contributed to the impact of Africa’s ?nancial services industry internationally.

During his tenure as CEO, the bank and Agbaje have won numerous awards. What is particularly interesting is the trend in types of award since GTBank has been under Agbaje’s leadership. Awards for ?nancial performance have been joined by Innovative Bank awards, Best Mobile Banking and Mobile Money awards, Best Digital Bank awards and, most recently, Digital Wallet of the Year award.

‘I’m not sure that, if we removed the word “bank” in five years, we would be losing anything. We might actually even be gaining something’

This trend re?ects Agbaje’s pioneering attitude towards digital transformation and the role of banking. Traditional bankers might think his view of the bank’s future a radical departure from mainstream banking, but for Agbaje it is change that has to happen: “Banks are going to become platforms, so we will become a trusted single, integrated platform,” he says. “Because the competition for banks has changed, where it was once other banks, now it is ?ntechs, telcos, Apple Pay, PayPal, payday-loan companies, salary-advance companies, even co?ee shops. Any bank that stays with the traditional banking model is going to get smaller and smaller. All these other companies will be taking part of your share of business.”

If some of the digital giants, like Google and Apple, start to develop banking services, the word ‘bank’ could soon be associated with ine?ciency and a lack of innovation, he adds. “I’m not sure that, if we removed the word ‘bank’ in ?ve years, we would be losing anything. We might actually even be gaining something.”

While there may be a lot of disruption in the banking sector, Agbaje has a head start on many traditional banks. For example, the bank launched its Habari mobile platform in November 2018: “What we’re trying to create is something where, when you come to the bank, however you do that, you are not just coming to pay and receive,” he says. “You can come into our ecosystem and do just about everything – pay for tickets, book holidays, stream music, buy online, watch videos, and then, because we are a bank, we can provide the payment engine.”

The reputation of bankers and banking took a knock following the global ?nancial crisis and Agbaje is well aware of the challenge banks face in terms of their relationship with the societies they serve. “A banking licence is a privilege, given to you by the regulator. Banks owe a social responsibility to the communities within which they operate,” he says. “Just as we monitor pro?ts, costs and return on equity, we must also monitor how much we give back in terms of social responsibility.”

This is not just talk. The bank interacts with the community in many ways, from football education programmes and tournaments to its internationally renowned annual conference on autism (now in its ninth year); from its You Read Initiative aimed at promoting a culture of reading to the Social Impact Challenge designed to unearth ideas that can enrich the lives of local communities.

Many of the bank’s CSR initiatives are aimed at community development, promoting entrepreneurs and small businesses. For example, there is the GTCrea8 Convention aimed at helping undergraduates “build successful businesses out of their passion”. The bank is also building shared service facilities for businesses in the food and fashion sectors, so that these small businesses can bene?t from the economies of scale enjoyed by large companies without the overheads.

The initiatives re?ect Agbaje’s passionate belief in Africa’s economic potential: “It is a continent that I am completely bullish about, because I don’t think there are many places in the world that have both the natural resources, the human population, the distribution of millennial; who are just incredible people. If you are able to tap into and unleash that human capital potential it is a continent that has a huge growth upside,” he says.

“What we have in Africa is a leadership problem. There are pockets, organisations, where the leadership is good. Those organisations function the way you would in a developed economy. If you start to get people with a track record of achievement running things – whether that is in countries, governments, parastatals – they will bring that excellence and achievement to government and Africa will start to change.”

He is just the leadership role model that the younger generation needs. “My values are simple ones. I believe in hard work, humility, integrity, and discipline. Those are the things that drive me,” he says. “If you have those values, show them, inculcate them into all the decisions that you make and you will be ?ne.”

He has naturally given some thought to what he might do after his time at GTBank: “Maybe I will get another platform to do something in the private sector. It could be in a completely di?erent sector to banking. My ?rst choice would be an Africa-focused organisation. A second option would be something, if not solely focused on Africa, with an emerging market emphasis.”

He would also be interested, he says, in mentoring young people with small businesses; helping them to think about organisational structure and governance, for example.

But for now, with two-and-a-half years left on his contract, he is fully focused on the transformation underway at GTBank. “I’m not ?nished,” he says. “We are trying to build a great African institution; putting the bank in the position I think it should be in – not just ?nancially, but socially, being a well-run enterprise.”

Agbaje is not someone to trumpet his achievements, but if his vision for the future of one of Africa’s largest and most important banks comes to fruition, more plaudits are likely to be heading his way.

Agbaje on leadership:
“My role is first to set the tone, to talk
the talk. When we set a vision, goals,
objectives, values, I have to be seen to
live and walk those.”

“I like to be involved in a lot of the key
decision-making. So it is a balance: being
really handson, so that I know what is
going on, while also giving people a large
degree of autonomy, because the number
of people reporting to me means that I
cannot micro-manage them – I rely on
their abilities.”

“I believe in a flat organisational structure.
I don’t believe in creating silos. I would
rather have a squad as opposed to a team,
which means I probably have more direct
reports than most CEOs.”

#MotivateMe: How To Stay Motivated During The ...

Children’sDay: 5 Facts You should Know About ...