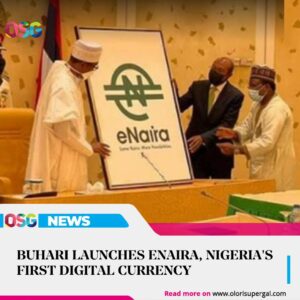 Recall that the digital currency was billed to be unveiled on 1st October, however, it was shifted due to activities on Independence Day.

The eNaira is a culmination of several years of research work by the Central Bank of Nigeria in advancing the boundaries of the payments system to make financial transactions easier and seamless for every stratum of society.

The event had in attendance the Vice President, Yemi Osibanjo; Governor of the Central Bank of Nigeria, CBN, Godwin Emefiele; Attorney General of the Federation, Abubakar Malami; among others.

Nigeria’s banking community, Fintech operators, merchants, and a cross-section of other stakeholders were involved in the design of this digital currency.

CBN noted that the launch of the digital currency is a major step forward in the evolution of money. The bank vowed to ensure that the eNaira, like the physical Naira, is accessible by everyone, particularly the unbanked as well as those living in the rural areas.

The launch was described by CBN Governor, Godwin Emefiele, as the first in Africa and one of the earliest around the world.

Emefiele said, “Mr. President, today you make history, yet again, with the launch of the eNaira – the first in Africa and one of the earliest around the world.

“Mr. President, as you make groundbreaking reforms, there has been continuing debate on the true value of the Naira.

“Rather than worry today on the direction of the exchange rate, let us take a step back and analyse how we got here in the first place”.