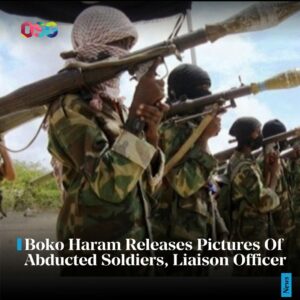 Boko Haram/ISWAP terrorists have released pictures of two soldiers and Yobe Liaison officer, that were abducted on Damaturu/Maiduguri highway on Saturday.

The terrorists also released the identity cards of the abductees.

It was discovered that two of the cards belong to Mai Lalle, Mustapha owns one and the the other belongs to Lpcl Oyediran Adedotun of the Nigerian Army.

The ID card of the Fourth officer was not seen from the lists of cards released by the terrorists.

Mai Lelle and Mustapha were reported to be traveling to Maiduguri while the two Army personnel were traveling on a permit to Kano State.

According to report, contact have not been made with the families since the pictures were released.

Comedian Oluwadolarz’s Mother Thanks God After He ...