A woman is the full circle. Within her is the ability to create, nurture, and transform. — Diane Mariechild

It’s Woman crush Wednesday and we want to celebrate all the women who won at the just concluded Future Awards Africa which took place on Sunday December 18, 2016 at Federal Palace Hotel, Lagos. 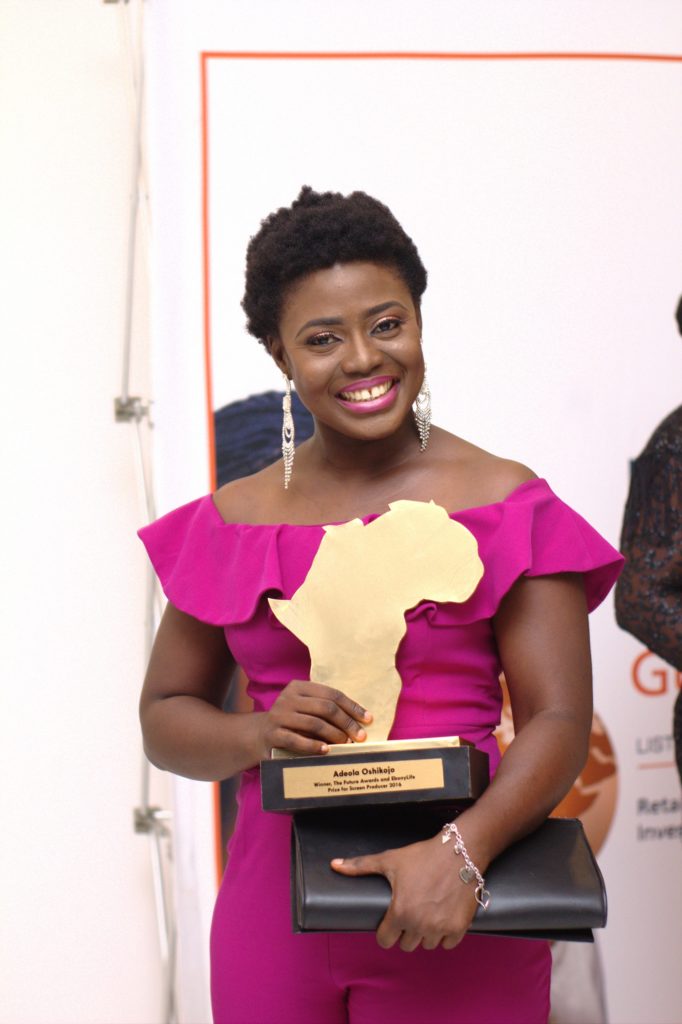 INCASE YOU MISSED IT  – See the full winners list here.

Winner, The Future Awards and EbonyLife Prize for Acting 2016 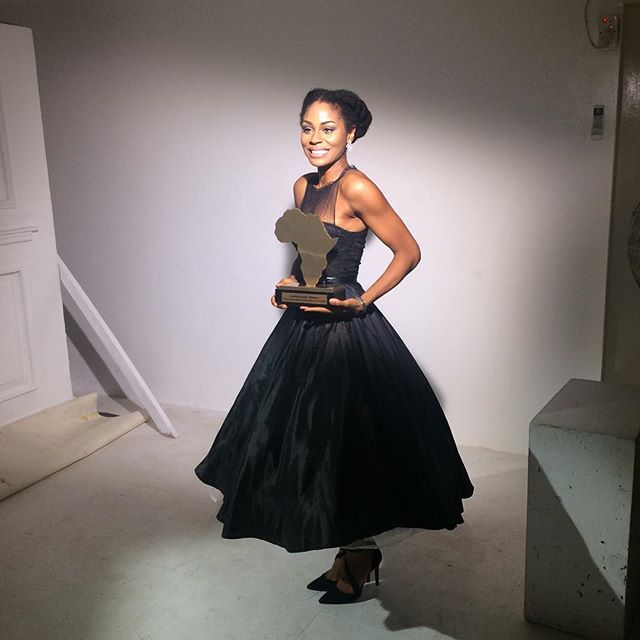 Somkele Iyamah-Idhalama is the face, future of a new Nollywood. She was recognised as a Rising Star by the Toronto International Film Festival for her role in 93 Days. She was arguably the heart and the soul of the heart breaking film that retells the story of how Nigeria overcame Ebola. For the role, she has been nominated for an Africa Magic Viewer’s Choice Award for Best Supporting Actress. She was also a winner of the Africa International Film Festival Special Jury Award, a high honour, for an actress whose filmography is well shy of the length of those she overcame to claim the award. She has appeared in almost every major production to be released in 2016: ‘The Wedding Party’, ‘The Arbitration’ and ‘The Department’. 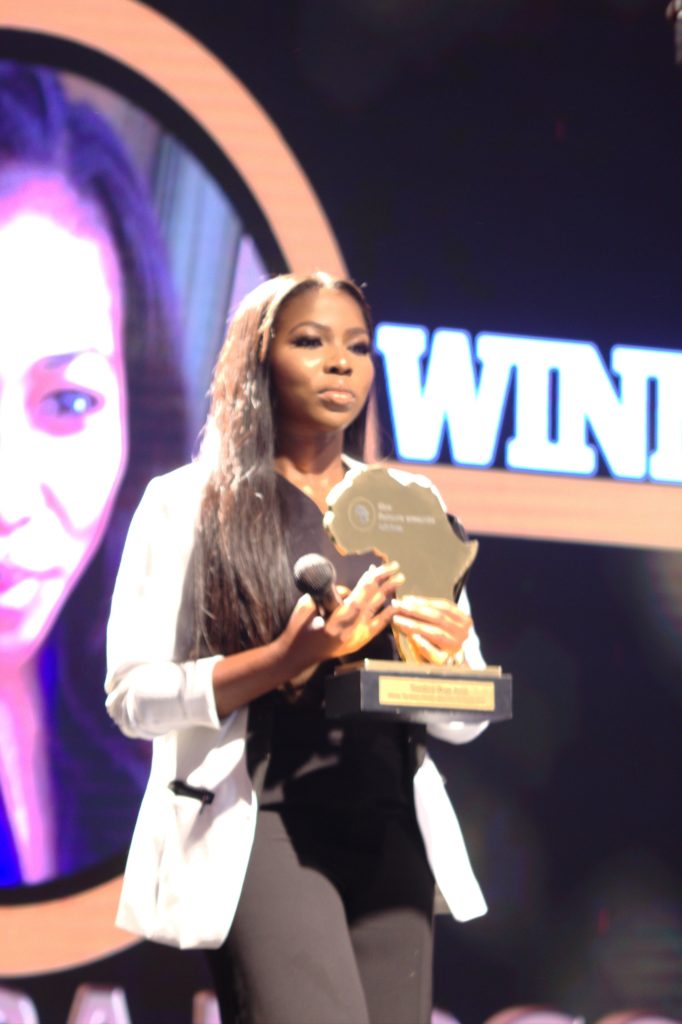 It is impossible to talk about the rise of the new wave of beauty in Nigeria without referencing Theodora Mogo. Mogo’s rise through the ranks is even more impressive considering she is self-taught and began her business offering free make up services to her friends and family. In four short years, that humble rolodex has grown to include renowned celebrities like Toke Makinwa, Eku Edewor, Victoria Kimani and Osas Ajibade. In 2016, Mogo expanded her empire, introducing the ‘Beat by Doranne’ master class series, a service that grown to include sessions in Ghana in partnership with Sparkle and Shine and The Beauty Technicians, some of the country’s finest professionals. Partnerships with international brands like Guerlain Paris, Phillips, Vane, BeautyRevNG and Hair by Ucan speaks to Mogo’s growing influence both as an individual and a brand and she uses this influence as a force for good, through awareness campaigns for breast cancer and women led SME’s at the COPE Foundation and WIMBIZ 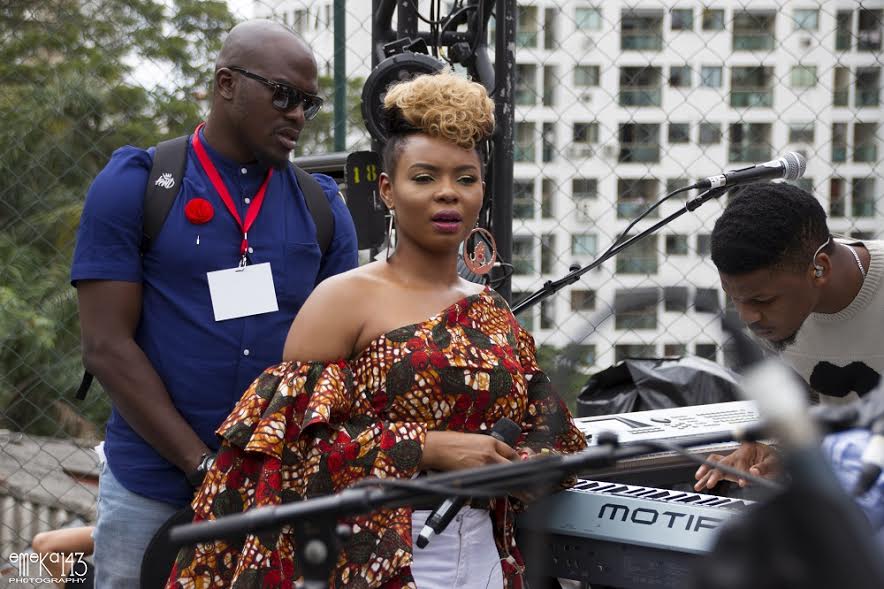 It takes guts to lay claim to the title ‘Mama Africa’ and Yemi Alade, Nigerian performing artist has that in spades. Starting her career in 2005 as part of Noty Spices, an all-girl group, Yemi Alade went solo, won the inaugural edition of the Peak Talent show and got signed to two labels, wresting control of her career with 2014’s stellar King of Queens, spearheaded by the runaway success of Johnny, the album’s first single. After unmitigated success through a series of thought out foreign language cross overs, Yemi Alade put out ‘Mama Africa’ her sophomore album and a joust for the title of most influential female musician in Africa.

Winner, The Future Awards and EbonyLife Prize for New Media 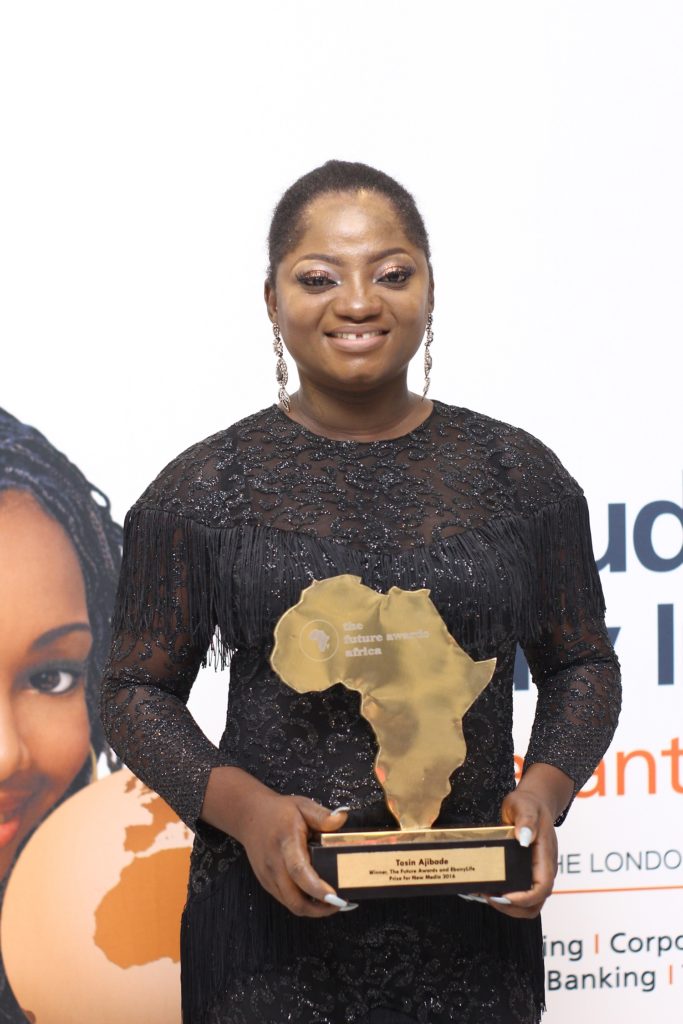 If it concerns new media, Tosin Ajibade is on top of it, literally. Through the lifestyle and entertainment website, Olorisupergal.com which Ajibade founded in 2008, Tosin breaks the news and offers much needed perspective on pop culture and happenings. But Olorisupergal has transcended the restrictive web formats and flourished on all the new media platforms, especially Instagram and Facebook, reaching thousands through a relentless feed of freshly gleaned information and opinions.  Ajibade uses her influence at home too, convening the inaugural New Media Conference to discuss the challenges and possibilities of doing business and creating sustainable brands through new media platforms. Ajibade also uses her reach to promote causes close to her, including gender equality, embrace of natural hair and sexual assault. 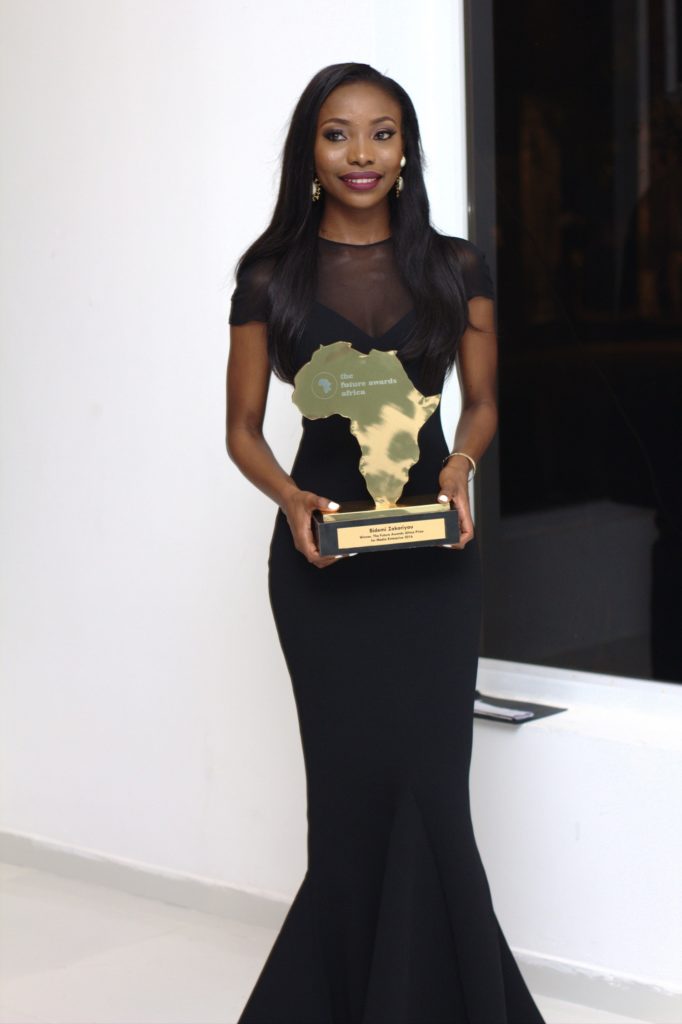 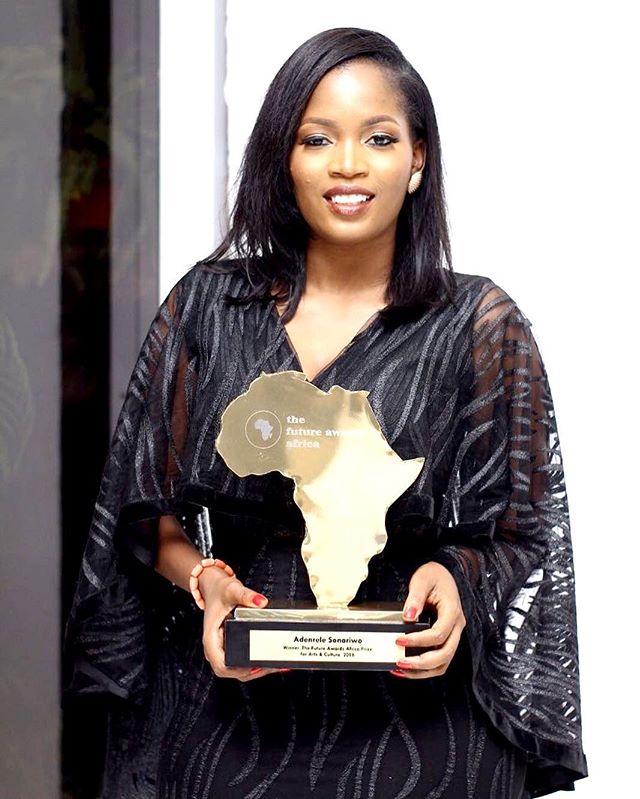 Before 2016, at no time in history was a visual art exhibtion ever held in Nigeria’s seat of power, The Presidency. Adenrele Sonariwo made and broke that record, transforming President Muhammed Buhari’s halls into a cavalcade of Nigeria’s trailblazing visual art talent. A former accountant, who worked in PriceWaterHouseCoopers for over half a decade in the U.S.A, she is the founder of contemporary art space, Rele Gallery. Through her work, she is building a new generation and market of art enthusiasts, collectors, followers for visual art. The gallery is also known for incubating and discovering young artistic talent and has exhibited in Art Hamptons, an international art fair in New York. In just over a year and a half of existing, the gallery and Sonariwo’s work has been profiled by global publications such as Financial Times, Forbes Africa and Vogue.

Bolarinwa is at the head of the fight against generational transfers of the sickle cell gene through her position as the president of Sickle Cell Aid Foundation (SCAF). The foundation which was created to improve awareness on Sickle Cell Disorder (SCD) has grown to be a recognised advocacy organisation in Nigeria. SCAF offers free genotype testing, awareness and counselling the six area council of the FCT. She also initiated the SCAFlympics, which promotes good health practices among Sickle cell warriors and draws attention to the physical limitations sickle cell eventually imposes on sufferers. In 2016, Bukola was selected for the Queen Elizabeth’s Young Leaders Programme in recognition of her work encouraging thousands of new people to give blood.

Winner, The Future Awards and EbonyLife Prize for Screen Producer

Transitioning from a career as a child/teenage actress, playwright and dancer is hard on most adolescents but not for Adeola Osunkojo.  Osunkojo shifted focus to television/film writing, producing and directing cut her teeth heading the content development team at MTN’s music reality show Project Fame, working with the show for six years before she left to pursue other interests. Since then she’s leaned in to television, earning directing credits on serialized shows including the popular The Life of a Nigerian Couple on Ebony Life TV which she also created, wrote and produced to rave reviews. The Life of a Nigerian Couple was included in the first African Short Film Festival, hosted by the Department of African and African American Studies at Harvard University in September 2016.

Winner, The Future Awards Africa and EbonyLife Prize for Journalism

From her base in Nigeria, she has worked for France24 as an international correspondent reporter since January 2015 and has worked as a producer and reporter for Al Jazeera since August 2013. The Medill School of Journalism and Georgia State University alumnus is a 2015 Finalist of the Livingston Young Journalist Award and the 2015 African Story Challenge Winner and Grant Recipient. In 2016, her article ‘The App That Saved 1,000 Children’ won in the Dow Technology & Innovation Reporting Award at the 2016 CNN African Journalist Award. The story focused on 24-year-old Nigerian computer enthusiast named Hamzat Lawal’s app that saved children in Bagega from dying from lead contamination. Chika reports from the human angle, capturing the human impact of the issues that affect people’s daily lives and have collaborated with Al Jazeera stories around the world to reporting on global projects. 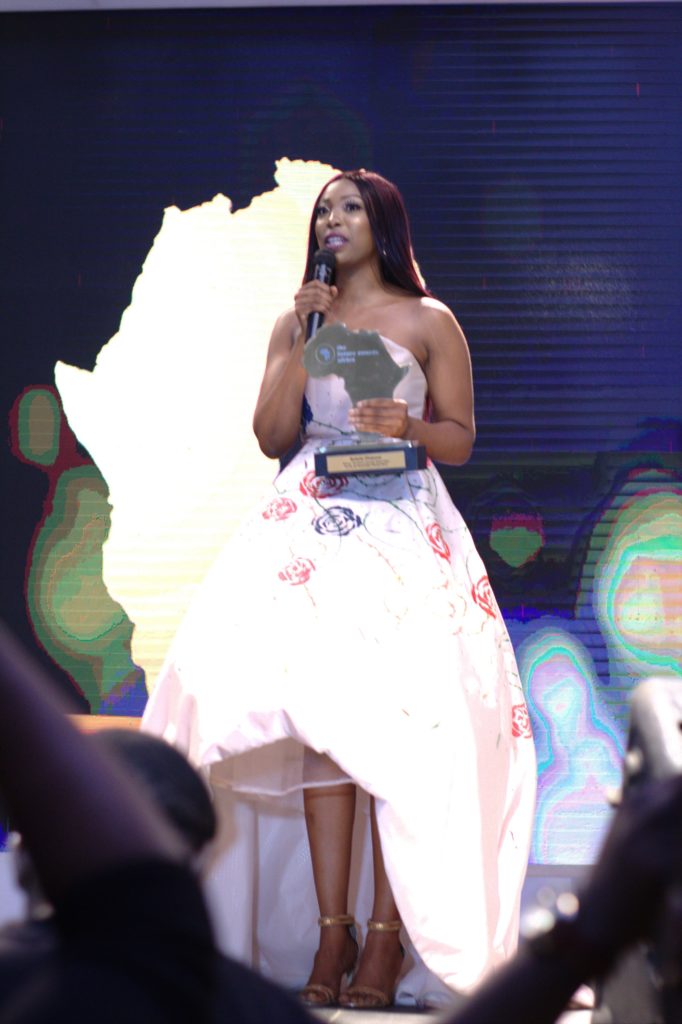 Olukanni, a Communications and International Studies graduate from Loyola University Chicago shot into the limelight after she won ‘Search for Mo’s Co-host’ competition in 2013. Her prize landed her a co-hosting job on ‘Moments with Mo’ alongside Mo Abudu and Dolapo Oni. Now rebranded ‘Moments’, she still co-hosts the Nigerian show alongside Toke Makinwa and Michelle Dede on EbonyLife TV. Bolanle has interviewed influential personalities such as Oscar-nominated actor Chiwetel Ejiofor, Grammy-award winning singer Brandy, Lagos State Governor Babatunde Raji Fashola, and does red carpet interviews at Nigeria’s most glamorous events. 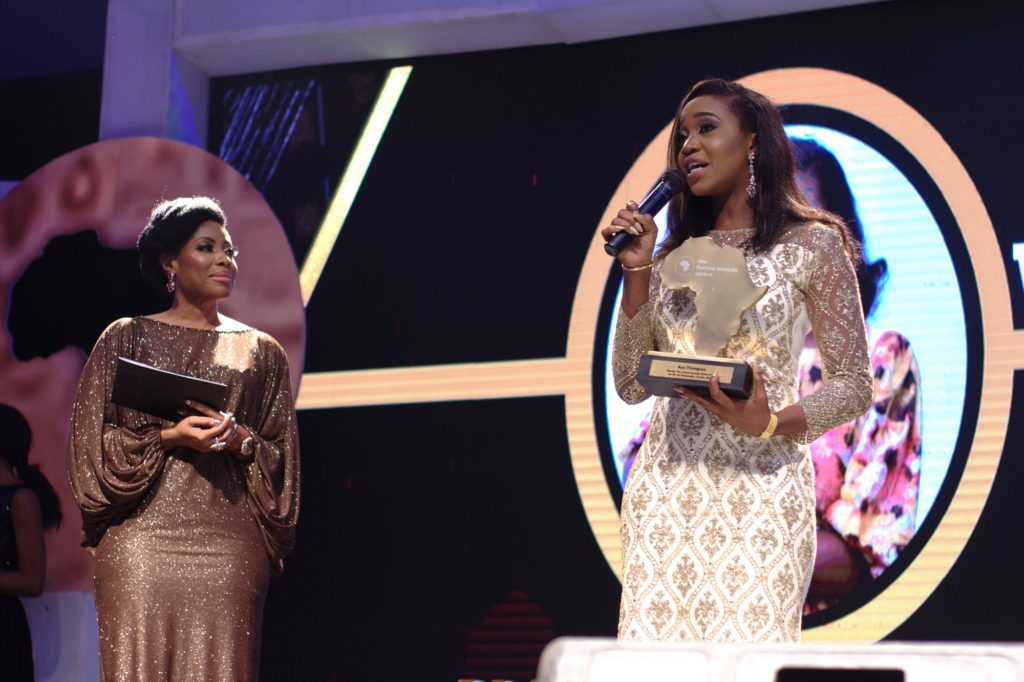 As the host of  Nigerian Info FM ‘The Woman,’ a weekly show that focuses on the Nigerian woman and everything that makes them phenomenal, Ayo Thompson gets to promote and uplift women distinguishing themselves in their various fields. This is a task she’s taken very seriously, drawing from a wide pool of seemingly ordinary to widely celebrated women and engaging each equally for their personal contributions to their communities, their country and women in general.  Prior to that role, she was a co-host of the popular Breakfast Show on 99.3, Nigeria Info FM ‘Morning Crossfire’ where she garnered a wide following. She is one of our generation’s leading voices on air.