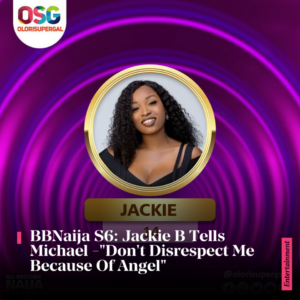 As the drama continues to unfold in the biggest reality TV show, Jackie B, has accused Michael of disrespecting her.

Jackie B said this after she confronted Michael in the garden on Saturday night for allowing Angel to romance his head.

She complained that she was across the table and Michael could have asked her to rub his head rather than Angel who he knows has feelings for him.

According to her, that was disrespectful especially in front of other housemates.

She said to him; “You disrespected me in front of everyone. We have a thing and you should have asked me to help you rub your head; to help with your migraine, not Angel.

“Don’t make me look stupid. Angel is like my younger sister. She’s just 21 years and it’s not that deep, but don’t disrespect me.

“Don’t try to play me and Angel on national TV. My child is watching”.

Responding to her accusations, Michael said he is being real with her.
He also said that her complaint is just all ‘Pre-imposed conclusion’ as he has nothing to do with Angel.