K-Brule and Khloe have been disqualified from the BBNaija game. Biggie announced their disqualification this evening, after they earned their 3rd strike as a team. 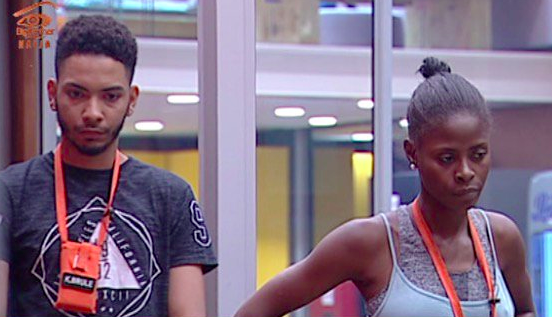 First reason the team got a strike:

Recall when K. Brule got drunk and jumped from the first floor? Yeah, that. He got a strike for that, and that marked the beginning of their strikes

Oh well, it’s all fun, banter and games till you call somebody’s mother a whore on live TV. This is what earned Khloe and K-Square a second strike. Apparently, K-Brule tried to kiss Leo, and Leo told Khloe. The head of house went got angry and in the process, she called K-Brule’s mother a whore.

One of the BBNaija rules is NO-physical assault. From the audition stage, if you show signs of physically-aggressive behavior, you won’t make it to the house. Therefore, when K-Brule almost hit Khloe, and had to be restrained by other housemates, Biggie had to issue a third strike.

Three strikes equals a disqualification even Khloe’s Head of House status couldn’t save her.