Two of the housemates in the finals, Alex and Miracle have won the close up challenge. Earlier on today Biggie asked the housemates to prepare for their Closeup task presentation, he also asked them to create groups and that they were to present the task in these groups. 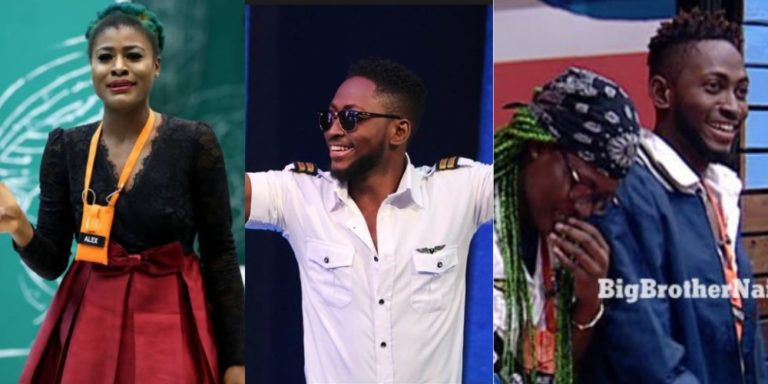 The Alex and Cee-C pair were the first to present their Closeup Task piece, Alex presented her bae issues, mentioning how her boyfriend always has her to brush her teeth before a kiss.

Cee-C then gave Alex some brushing advise, alerting her that there are very damaging and ineffective brushing methods that lead to oral problems. She also offered her some Closeup products like tooth paste and tooth brushes.

Miracle and Nina (Alpha) were then the second to present their piece, Miracle was to go on a date and his brother advised him to cover his mouth when talking to the ‘babe’ who in this case was Nina and it looked like he too needed some Closeup intervention.

Miracle tried his hardest to keep his mouth covered while talking to the babe (Nina) but his hand gave in and the odour escaped, having Nina leave him right there.

Miracle’s ‘brother’ then offered him a range of Closeup products in order to rectify his mouth odour problem and also advised him to get rid if his father’s toothbrush.

Miracle heeded his brother’s advise and got his brush on, it was then that Nina obliged to a second date and scored himself a bae.

Tobi and Cee-C were then the third pair to present, Tobi tried to chase his singing dreams but ended up being chased off the stage because of his smelly mouth. Tobi’s babe then offered some Closeup products and he comed back with a fresh breath. She also gave him more mouth health advise.

Then Miracle and Alex’s pair was the next in line, Miracle tried to keep his odour from ruining his job interview but Alex insisted that he spoke and when he did, need we say more…

Miracle then decided to seek medical advise, The doctor broke the odour dilemma down and advised him to use his new Closeup products instead of the toothbrush he’s used since he was a kid.

Thanks to Closeup, Miracle managed to kick the odour blues away and got his dream job.

Tobi and Nina (Omega) were the very last pair to present, Nina and Tobi had been tinder buddies for a while and decided to meet. Things however took a rather smelly turn when Nina uncovered her mouth which resulted in Tobi running off. Dr. Tobi then explained the odour issue and offered Nina a range of Closeup products in order to improve her chances of getting a kiss.

And after all the pairs’ presentations, Miracle and Alex (Delta) emerged as the winners of the Closeup challenge thereby bagging One Million Naira and Closeup products worth 50,000 Naira.

Congratulations to both Miracle and Alex..