The tension in the Big Brother Naija house has reached another height, after the wild cards nominated four other housemates for possible eviction. 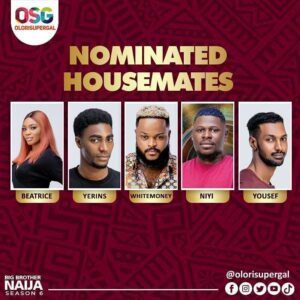 The wild cards, Pere and Maria are the only housemates allowed to nominate others.

In the second diary session, Pere mentioned Beatrice, Yerins, Niyi and WhiteMoney as housemates up for possible eviction.

Recall that Maria, when asked to mention names of housemates who may be evicted, she mentioned Beatrice, Yerins, WhiteMoney and JayPaul.

The season 6 edition of the reality TV show themed “Shine Ya Eye”, took another dimension after Big Brother added two housemates to the usual 20 and they referred to them as the wildcards.

The housemates were tasked with unveiling who the wild cards are after which they would be evicted form the original housemates.

However, after a week of guessing hard who the wild cards are, almost all the housemates picked Liquorose and Jaypaul as the wild cards.

On Sunday, which was supposed to be the first eviction night, the host of the show, Ebuka Obi Uchendu disclosed to the housemates who the wild cards were. This automatically qualified them to compete with other housemates as they could not be fished out.