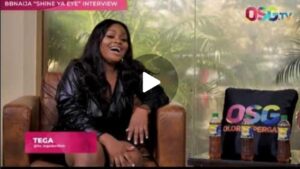 In her interview with Sergeant Olori, Tega, who is the first married woman to be on the show disclosed that she auditioned five times before she was picked. She noted that she can’t trade her experience for anything in the world.

She talked about her eviction and how she was not surprised it happened. Being in the house was all about fun and nothing more.

Tega talked about Boma as not being a kiss-and-tell kind of guy as speculated by other housemates. She noted that she had always liked Boma since the day the female housemates were introduced into the show.

Taking a look at how the attachment with Boma started, Tega said they had a conversation to put up an act after they got droppings from the housemates. However, what the audience sensed from their actions is different.

She talked about the insults hurled at her and her husband’s reaction. She noted that she was down with her emotions after watching her husband’s Instagram live interview.

Tega revealed to Sergeant Olori she almost asked for a voluntary exit.