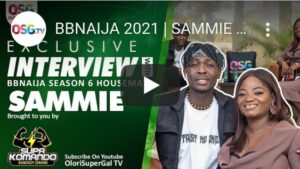 In his interview with Sergeant Olori, the lover boy’s angle was the first point of concentration. Sammie talked about how he got attracted to Angel because of her story. He noted that he had to apologies to her following the misunderstanding between them because of the low vibe he got in return.

About other relationships in the house, Sammie noted that Peace was an option and he wasn’t catching a cruise.

He disclosed that sometimes the housemates bath together.

Reacting to his eviction, Sammie had earlier said there is no use been on the show if people don’t like him. However, he wasn’t surprised Saga and Nini put him up for eviction.

He also said he is going to miss the enjoyment in Biggie’s house such as the Friday jacuzzi and the Saturday party.

Supa Komando Energy Drink is the real deal that got Sammie and other housemates energized in Biggie’s house.

His energized interview on OlORISUPERGAL TV is a confirmation!

Rema – “You Work Differently When Generational ...