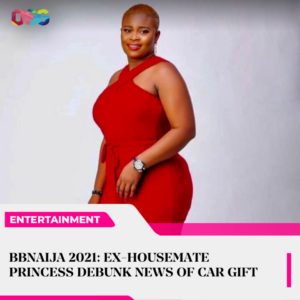 Big Brother Naija season 6 ex-housemate, Princess Francis has debunked the news of receiving a car gift from her fans.

Recall that Arin and Princess were evicted on Sunday, 15th August, during the live eviction show. They were the second set of housemates to leave the show.

On her Instagram page, Princess posted the car she was alleged to have gotten from her fans and wrote;

“FAKE NEWS.
This post is to debunk any news about fans getting Princess Francis a car, we don’t know how this started or the reason behind it, but we want to put this out here that it is a lie and plead with the general public to ignore this and ask blogs to stop posting fake information without raw facts.

“Make Una buy me real car
THANK YOU ALL FOR THE LOVE AND SUPPORT.

According to Princess’s profile, she was working as a taxi driver before she became one of the housemates in the biggest reality TV show.