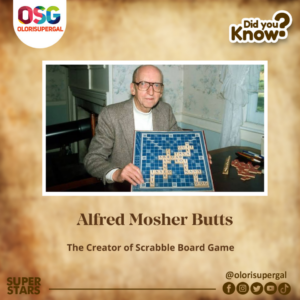 Alfred Mosher Butts was born on 13th April 1899. His parents were Allison Butts and Arrie Elizabeth Mosher. His father was a lawyer, and his mother was a high school teacher.

The Scrabble Brand Crossword Game began as the idea of Butts who was an architect who found himself unemployed during the Great Depression. Butts was not one to feel sorrow for himself when he was laid off. Instead, he decided to make good use of his time and see if he couldn’t create a board game.

Butts was very analytical in his approach to this project. First, he examined the categories of games that were popular. He learned they fell into three categories—number games like dice and bingo; strategy games such as chess and checkers; and word games such as anagrams. He felt the ideal game should involve both chance and skill. If winning the game involved a bit of chance or luck, it would keep things interesting for both the novice and the expert player.

As he researched, he focused on creating an interactive crossword-type of game. What if players had letters they could play? If individual letters became playing pieces, then his next step was to analyze letter usage within common words. (Remember that Butts was doing all this without the aid of a computer.)

He used the front page of The New York Times as his study guide. He found that just 12 letters (E, T, A, O, I, N, S, H, R, D, L, and U) accounted for 80 percent of the letters used most frequently. This study of letter usage also gave him the data he needed to add point values for the use of each letter.

As Butts experimented, he found a weakness in the game. If players had access to too many “S” letters, then they could score by making a previously-played word plural. To make that aspect of the game more difficult, he created only four squares of the letter “S.”

The first game Butts created involved squares of cardboard with letters. Their point values were written on each square. As his satisfaction with his creation grew, he began gluing the letters to plywood to make them more durable. He also handcrafted small racks to hold the letters.

Initially, he saw no need for a board, so the game he designed was more like a card game. All players needed was a flat surface on which to play the game. Butts called the game “Lexico.” Later, he simplified it to “Criss Cross Words” and added a game board.

For the game to reach a broad market, Butts needed to have it picked up by a company that could manufacture and sell it, so he began making the rounds to game manufacturers. His visits to the companies were unsuccessful, however. It seemed the game was destined to be a novelty that he sold to a few hundred people.

In 1935, the housing market appeared to be turning around. As a result, Butts was re-hired by his old architectural firm, Holden, McLaughlin & Associates.

He returned to designing houses, and for the most part, he set the game aside. He still had a few copies of the game, so if people expressed interest, he sold them copies. A few people still played.

In the late 1940s, a fellow by the name of James Brunot (1902-1984) saw the game and thought it had commercial possibilities. Brunot was a federal employee and was contemplating retirement. But he wanted a small business that would keep him occupied in his new life.

Brunot contacted Butts and offered to buy the rights to the game. Butts was interested but he was smart. He agreed to a sale with the provision that he would retain patent rights on each game sold.

James Brunot loved the game but also saw some places where it could be improved. He moved the “start” point to the center of the board (instead of the upper left corner). He also came up with the board color scheme that still exists today.

He also renamed it Scrabble. The word “scrabble,” is from a Dutch word meaning “to grope–reach for something frantically.” (Today the game is so well-known that few would ever think to use the word in common conversation unless they were talking about the game.)