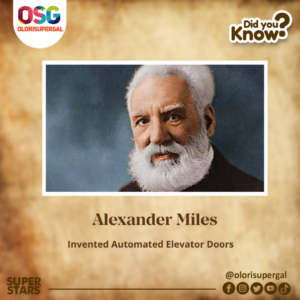 Alexander Miles was born in Washington near the town of Circleville, Ohio, in 1838. His parents are Michael and Mary Miles.

He resided in Chillicothe, Ohio but later moved to Waukesha, Wisconsin, where he earned a living as a barber. He later married a widow who had two children and four years his senior. They conceived a daughter named Grace in 1876.

Miles got the idea for his elevator door mechanism after his daughter, accidentally fell down a shaft, which almost got her killed.

During his time, elevators doors had to be closed manually, often by dedicated operators. If the shaft was not closed, people could fall through it leading to accidents.

Miles improved on this mechanism by designing a flexible belt attachment to the elevator cage, and drums positioned to indicate if the elevator has reached a floor. The belt allowed for automatic opening and closing when the elevator reached the drums on the respective floors, using levers and rollers.

In 1887, Miles was awarded a US patent for automatically opening and closing elevator doors.

In 2007, Miles was inducted into the Inventors Hall of Fame.