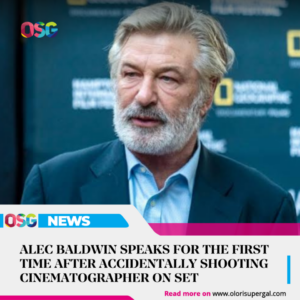 American actor, Alec Baldwin has spoken publicly for the first time on camera about the accidental shooting on the set of a film that killed cinematographer Halyna Hutchins.

In a video released by TMZ, the 63-year-old actor told photographers by the roadside in Vermont that he is cooperating with police and has been speaking to them every day. However, he maintained that he could not speak on the active investigation.

He said, “It’s an active investigation in terms of a woman died, she was my friend. We were a very, very well-oiled crew shooting a film together, and then this horrible event happened”.

Asked about the husband of Halyna Hutchins, Baldwin said, “He is in shock, he has a 9-year-old son. We are in constant contact with him because we are very worried about his family and his kid. As I said, we are eagerly awaiting for the sheriff’s department to tell us what their investigation has yielded.”

The photographers are said to have been hounding Baldwin and his family and following them around, including on the open road.

So, Baldwin and his wife Hilaria pulled over to confront the photographer, whom Baldwin says made his kids cry.

When Baldwin made the impromptu stop, he agreed he was speaking out so that the photographers would stop following his family.

He admitted the fatal shooting on the set is a “one in a trillion event.”

Baldwin said he is “extremely interested” in limiting the use of firearms on set following the fatal incident.

“How many, billions in the last 75 years? And nearly all of it without incident. So what has to happen now is, we have to realize that when it does go wrong and it’s this horrible, catastrophic thing, some new measures have to take place.

“Rubber guns, plastic guns, no live — no real armaments on set. That’s not for me to decide. It’s urgent that you understand I’m not an expert in this field, so whatever other people decide is the best way to go in terms of protecting people’s safety on film sets, I’m all in favor of and I will cooperate with that in any way that I can”.

Baldwin was joined by his wife, Hilaria, when he spoke to photographers and she filmed the exchange with her smartphone, often trying to get her husband to stop talking.

Recall that the actor, discharged a gun on the set of Rust in Santa Fe, New Mexico on October 21, accidentally killing Hutchins, 42, and injuring the film’s director Joel Souza.

Investigators believe Baldwin’s gun fired a single live round. Since then, multiple accusations of unsafe working conditions have surfaced as police try to determine who was to blame for the horrific incident.

Investigators in New Mexico where the shooting occurred have said that there was “some complacency” in how weapons were handled on the movie set but it’s too soon to determine whether charges will be filed.

Santa Fe County Sheriff Adan Mendoza has said 500 rounds of ammunition — a mix of blanks, dummy rounds, and suspected live rounds — were found while searching the set of the Western film, Rust.