Nana Akufo-Addo has been sworn in as Ghana’s new president, promising to stamp out government corruption and kickstart the private sector.

The 72-year-old former human rights lawyer today took the oath of office at a ceremony in Independence Square in the capital Accra in front of more than 6,000 guests and a roaring crowd.

Wearing a traditional robe draped over one shoulder, Akufo-Addo waved a gold sword — a symbol of Ghana’s presidency — before giving his inaugural address as head of state.

“We no longer have any excuses for being poor,” Akufo-Addo said.

“We must restore integrity in public life. State coffers are not spoils for the party that wins an election, but resources for the country’s social and economic development,” Akufo-Addo said.

The new president underlined his campaign promise to support entrepreneurs and attract investors to the country, which has suffered from lacklustre growth in recent years.

“We will reduce taxes to recover the momentum of our economy,” Akufo-Addo said.

“Ghana is open for business again.” 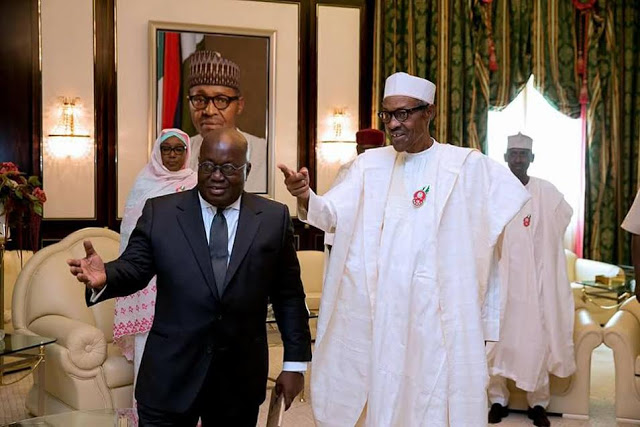 President Buhari together with ten other African heads of state attended the ceremony, as well as the outgoing president John Dramani Mahama, and former leaders John Rawlings and John Kufuor.