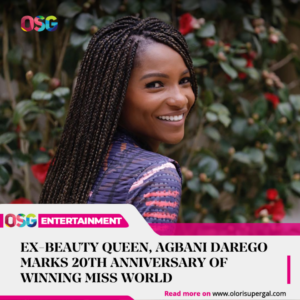 She made this announcement on her verified Instagram  page, where she shared the video of herself when she was crowned 20 years ago.

In the caption, the model stated that she was grateful for the experience.

She said, “20 years today! Forever thankful for the experience @missworld.”

Agbani broke into global consciousness when she became the first native African to win the Miss World beauty pageant in 2001.

The former University of Port Harcourt student later enrolled at the New York University where she studied Psychology, graduating in May 2012.