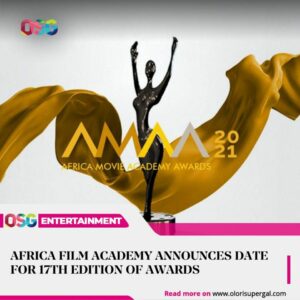 The Africa Film Academy (AFA), organizers of the premier and the most prestigious movie award in Africa has announced that the 17th edition of the Africa Movie Academy Awards will hold on the 28th of November 2021 in Lagos Nigeria.

The nominations announcement will also hold in Lagos Nigeria, on the 21st of October.

The Africa Film Academy also announced that it is set to launch a new initiative, “100 Film Project” which is aimed at training and supporting African creatives.

He is also the Chairman of the Governing Council of AMAA, a position he has held for over ten years. He is a pioneering member of the 17-year-old Africa Movie Academy Awards with a rich background in the film and festival circuit internationally.

Peace Anyiam-Osigwe said, “All this and more make him best suited to navigate our Jury process during this fast-changing season in the film industry”.

The organizers also noted that for safety reasons and travel restrictions, from the ongoing Covid -19 wave, many will not be able to attend physically, the ceremonies this year will be a hybrid of both physical and virtual participation.

While announcing the 100 Film Project, a flagship project of AFA, Abiola Durodola, the Project Lead noted that AFA will be training new talent for the film industry which is all-encompassing of the wider creative community and skilled labor like carpenters, tailors, and hairdressers.