Actress Rosaline Meurer has finally opened up about her life after the crash of Tonto Dikeh’s marriage .According to her, more jobs came her way as she became popular due to the accusations and allegations leveled against her by Tonto Dikeh . She revealed all of these in a recent interview.
The Nollywood actress, trended for the better part of 2017 as she was accused by Tonto Dikeh of being the cause of her failed marriage. She was constantly the topic of discussion on most blogs and social media platforms. 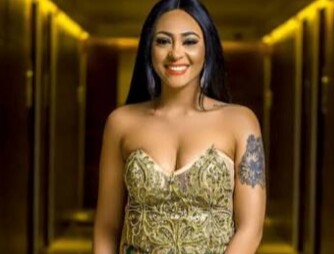 Rosaline however totally denied having an affair with Olakunle Churchill. From the look of things, the pretty actress seems to be doing well for herself. Speaking on the scandal, she had this to say: “The stones that were thrown at me with intentions to bring me down last year when I was used to cover up a marriage crisis turned around to be in my favour with God on my side. I got more jobs and more money. At first, I was bothered; then I realised that so many other innocent people were used and lied on as well in the same situation. Out of respect for the head of the family and because I and my family have come a long way with him even before I relocated to Nigeria, I decided to let go. I don’t have any relationship with Tonto Dikeh; I only know her to be Mr. Churchill’s ex-wife.”

When asked about her current relationship status, she stated that it was private and she woulds rather not speak on that. “I like to keep my relationship status private. However, I love men who have integrity, are hard-working and have the fear of God. I love someone who is honest, loves hard, tells the worst truth instead of his best lie, loves and respects his parents, loves to cuddle and travel”.