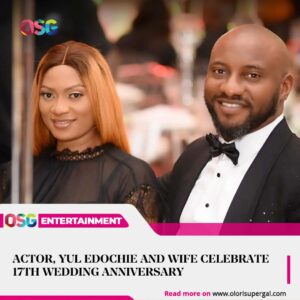 The 39-year-old actor took to his Instagram page to share a picture of himself and his wife to celebrate their special day. He thanked God and appreciated his wife for loving and supporting him.

“Big Congratulations to us. I thank God for His grace.

“Thank you to my dear wife May Yul Edochie for the love and support always. Truly appreciated. I love you”.

Yul, who is the last child of veteran actor, Pete Edochie, married his wife at the of 22 after they dated for six years.

He followed in his father’s footsteps and made his debut in the movie industry a year after his marriage.

Asides from acting, Yul also delved into politics in 2017 as he unsuccessfully ran for the post of Anambra State Governor.

He, however, has revealed his intention to run as Nigerian President in the forthcoming 2023 general elections.

Yul and his wife are blessed with four children Danielle, Kambi, Karl, and Victory Edochie.