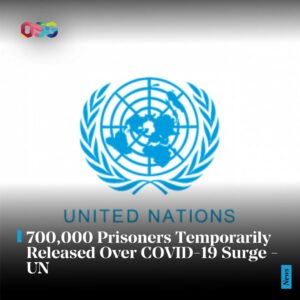 The United Nations, have disclosed, that at least 700,000 prison inmates, have been authorised for temporary release as a result of COVID-19 increase in some selected countries.

This was made known on Friday, in a UN study titled ‘Prison population surge triggers overcrowding, COVID casualties’.

The study revealed that for nearly half of the countries with available data, most prisons inhabit more than its 100% capacity due to overcrowding.

In light of the COVID-19 spread, most of the countries have decided to decongest their prisons.

Unrest Over Jailing Of Zuma Is Co-ordinated ...