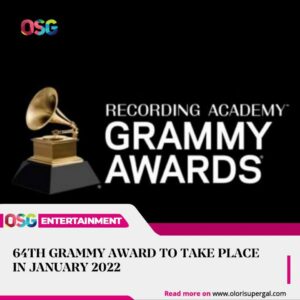 The Recording Academy has announced that the 2022 GRAMMY Awards show, officially known as the 64th GRAMMY Awards, will take place on Monday, 31st January 2022.

According to the Academy, the nominations for the award will place on Tuesday, 23rd November 2021.

The music’s biggest night will return to Los Angeles’ STAPLES Center and will be broadcasted live on the CBS Television Network and stream live and on demand on Paramount+.

The list of dates for the 64th GRAMMY Awards process and additional details are below;

The Grammy is an award presented by the Recording Academy to recognize achievement in the music industry.