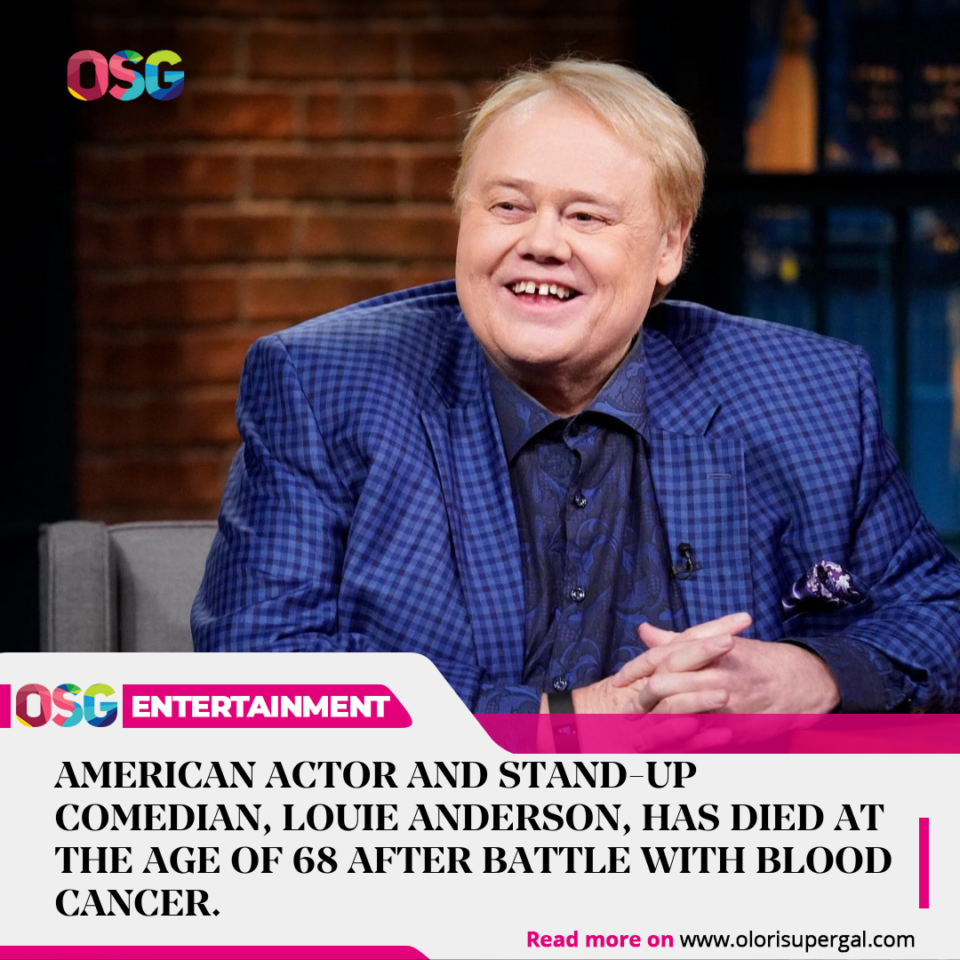 Glenn Schwartz, Anderson’s longtime publicist said he died at a hospital in Las Vegas of complications from cancer,

A statement obtained by PA from his representative said:

‘He is survived by his two sisters, Lisa and Shanna Anderson.’

The news comes after his friend, comedy actor Pauly Shore, said on Thursday that he was saying his goodbyes to Anderson.

Shore, 53, took to Twitter on Thursday afternoon, revealing he just left the hospital in Las Vegas, where Anderson had been surrounded by his family.

Attention comedians and @TheComedyStore alumni’s I say this with a heavy heart just left the hospital in Las Vegas where Louie Anderson his sisters and close friend were kind enough to let me say my goodbyes he’s still with us but keep him in your prayers,’ Shore said.

The winner of three Emmy awards, Louie had a prolific career which included roles in Baskets and the hit film Coming to America.

Anderson expressed surprise after learning Eddie Murphy was ‘forced’ to cast him in the 1988 hit comedy Coming to America because studio execs wanted to include a ‘white person’.

Murphy made the claim during an appearance on NBC’s Today, stating:

‘The whole cast was black, and the studio was like ‘We have to have someone white in this movie or we’re not going to make it’… So that’s how Louie wound up in the film.’

Anderson, who played fast-food worker Maurice in the blockbuster comedy, spent the past 33 years unaware that he was a token inclusion, and took to Twitter to share his shock.

‘Wait, what?’ and shared above a clip of Murphy making the claim.

Anderson was born and raised in St. Paul, Minnesota, making his nationally-televised comedy debut on The Tonight Show in 1984.

He had small roles in movies like Cloak & Dagger and was cast alongside Bronson Pinchot in The Greenhorn, before he was replaced by Mark Linn-Baker in what would become Perfect Strangers, which ran for eight seasons.

He also starred in small roles in Ferris Bueller’s Day Off, Coming to America and more while continuing to perform stand-up comedy.

He created and starred in The Louie Show in 1996 and continued to work in movies and TV throughout the 2000s.

Anderson won his first Emmy for playing Christine Baskets in the FX comedy series Baskets, which ran from 2016 to 2019.

He was a familiar face elsewhere on TV, including as host of a revival of the game show Family Feud from 1999 to 2002, and on comedy specials and in frequent late-night talk show appearances.

Anderson voiced an animated version of himself as a kid in Life With Louie. He created the cartoon series, which first aired in primetime in late 1994 before moving to Saturday morning for its 1995-98 run. Anderson won two Daytime Emmy Awards for the role.

He made guest appearances in several TV series, including Scrubs and Touched by an Angel.

Music Producer Snubbed Me Because I Was Broke - Ruger