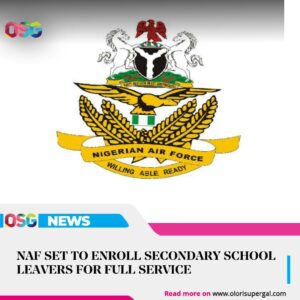 The Nigerian Air Force is set to bring back the immersion programme of secondary school leavers, known as Ex-Junior Airmen into military service as airmen.

The Chief of Air Staff, Air Marshall Isiaka Amao, made this known at the 36th Passing Out Parade of junior airmen of the Air Force Military School in Jos, Plateau State.

The CAS, represented by Air Vice Marshall Isa Muhammad, said some of the students who indicated an interest in serving their country keyed into the automatic absorption programme and were deployed to various NAF units across Nigeria after undergoing the consolidation training at Military Training Centre, Kaduna.

Amao said, “The level of training you acquired while at Air Force Military School will be worthless without commensurate application of this endeavour in the form of service to our fatherland as airmen.

“This informed the NAF’s decision to re-introduce the absorption programme of the Ex–Junior Airmen into the Service as airmen. Already, some of your predecessors that indicated interest have keyed into the automatic absorption programme and have since been deployed to various Nigerian Air Force units across the country after undergoing the consolidation training at Military Training Centre Kaduna.”

The air chief also called the graduands to uphold the good tenets they learnt while in secondary school and those they would learn in the service, to enable them to maintain the high standards expected of them by the Force.

He added, “On this note, I implore you to uphold the good tenets you have learnt while in the School and those you would learn in the Service to enable you to maintain the high standards expected of you by the Nigerian Air Force”.

COVID-19: FG To Bar Unvaccinated Workers From Work By December 1

WHO Establishes Group To Study Origin Of Coronavirus

WHO Establishes Group To Study Origin Of Coronavirus