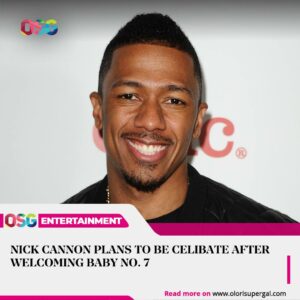 This comes after he made headlines this past year for having four children with three different women in the span of a few months.

During an interview with DJ EFN and N.O.R.E. on Revolt’s Drink Champs, the 40-year-old opened up about holding off on expanding his family, at least for the time being.

“I told you, man, I’m celibate right now. I’m going to see if I could make it to 2022. I’m trying to chill out though. I’m chillin’, I’m kind of stepping away, getting focused, going within, getting my celibacy on. I have enough children, enough frolicking, I’m good right now.

When both hosts joked that Nick was “not really, kind of” celibate, he responded, “Nah, y’all said I ain’t really. I’m saying I’m going in.”

Although the Love Don’t Cost a Thing actor is temporarily changing his lifestyle, he previously discussed welcoming four kids within the same year.

Nick said he didn’t understand what all the fuss was all about while appearing on The Breakfast Club in August.

Well, why do people question that? Nick replied when asked about people’s questions surrounding his growing family:

The actor is the father of 10-year-old twins, Monroe and Moroccan, with his ex-wife Mariah Carey. He welcomed 4-year-old son Golden and 10-month-old daughter Powerful Queen with Brittany Bell.

Taaooma – Everyone Is Nothing Without The Media