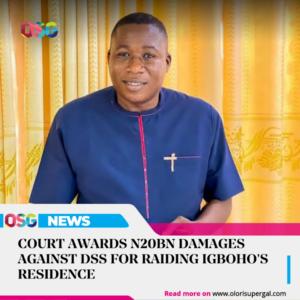 An Oyo State High Court has declared the raid conducted by the Department of State Service on the residence of Yoruba nation agitator, Sunday Adeyemo, better known as Sunday Igboho, in Ibadan as illegal.

Following the raid, Igboho sued the Federal Government and demanded damages. He asked the court to order the respondents to jointly pay him the sum of ?500 million as special damages for the damage done to his house and his car and another ?500 billion as exemplary and aggravated damages for beaching his fundamental rights with the malicious invasion of his house as well as an order directing the Federal Government and the other respondents to tender a public apology in two national dailies.

Igboho filed the application, through his lawyer, Yomi Alliyu, to enforce his fundamental human rights, according to Sections 33-46 of the 1999 Constitution as amended and relevant articles of the African Charter on Human and Peoples Rights.

The application was filed on July 22 before the Ibadan Division of the Oyo State High Court.

Apart from the Attorney General of the Federation, the State Security Service, and the Director SSS, Oyo State were also listed as respondents.

Annie Idibia Shower Praises On Her Mother Amidst Accusations

Annie Idibia Shower Praises On Her Mother Amidst Accusations