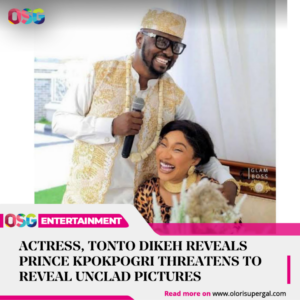 Nollywood actress, Tonto Dikeh has disclosed that her former boyfriend, Prince Kpokpogri plans to release unclad pictures of her.

In a petition filed against the politician, the actress accused him of blackmail, extortion, and obtaining by false pretense.

Part of the petition reads, “From sometime in June 2021, one Prince Kpokpogri Joseph started to court our client with a proposal to marry her. In the process, he would invite our client to his residence, and sometimes, he came over to our client’s residence.

“Unknown to our client, the said Joseph Kpokpogri (who our client later discovered to be a serial blackmailer) had other motives for courting our client.”

“Our client now has reasons and evidence to believe that Joseph Kpokpogri has planted closed-circuit television cameras (CCTV Cameras) at private areas of his residence, and had stage-managed those visits with the aim of blackmailing our client.”

“She was surprised when sometime in August 2021, the suspect started demanding money from her and threatening to expose nude pictures and other such documents relating to her.”

“To actualize his demands, the said Kpokpogri started sending messages, documents, and files containing sensitive information and materials relating to our client to her phone while also releasing some to the public.”

“Our client believes that some of those information were obtained either by wire-tapping her phone and/or through such other means without her authorization.”

The petition further demanded that Kpokpogri releases a Toyota Truck belonging to Dikeh in his possession.

According to reports, Kpokpogri was allegedly arrested by the Department of State Service on Wednesday, 16th September. He has however denied the reports.

Recall that the controversies between Prince Kpokpogri and Tonto Dikeh started after they broke up earlier this month.

Audio recordings between the estranged couple made rounds on the internet last week. In the recording, Tonto was heard begging her ex-boyfriend not to leave her, after he accused her of cheating.

Man Accused Of Cheating With Omah Lay’s Girlfriend Defends Her

Man Accused Of Cheating With Omah Lay's Girlfriend Defends Her