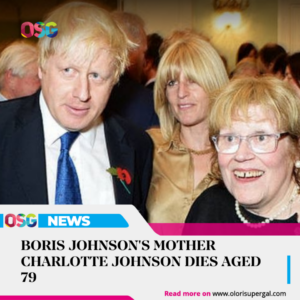 UK prime minister, Boris Johnson is mourning the loss of his mother, the artist Charlotte Johnson Wahl, who passed away at the age of 79.

According to a notice published in Times newspaper, she died “suddenly and peacefully” at a London hospital.

She was diagnosed with Parkinson’s Disease at the age of 40 and later became president of the European Commission for Human Rights.

The Prime Minister once described her as the “supreme authority” in his family.

Born Charlotte Fawcett in Oxford in 1942, Mrs. Johnson-Wahl was the daughter of the barrister Sir James Fawcett – who was president of the European Commission for Human Rights in the 1970s.

One of five children, she studied English at Oxford University. But she interrupted her education to travel to America with Stanley Johnson, whom she met at Oxford and married in 1963.

As an artist, Mrs. Johnson Wahl made her name as a portrait painter, with actress Joanna Lumley and author Jilly Cooper among her subjects.

In 1988, she married American professor Nicholas Wahl and moved to New York – where she began painting cityscapes. She returned to London in 1996 following his death.

The Prime Minister’s son Wilfred was her 13th grandchild.