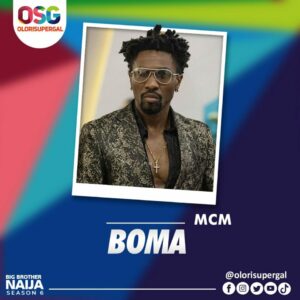 Boma Akpore is a 34-year-old actor, model, mixologist, and masseuse, who hails from Delta State, but grew up in the Yaba area of Lagos State.

He describes himself as sexy, intelligent, adventurous, strong, and fit. He also considers himself as extraordinary and unpredictable.

He was the youngest model to grace the runway of the Nigerian Fashion Week in 2004. He also went on to model for top Nigerian designers.

Before coming to the big brother show, he lived in Europe where he was hustling on his acting career. He worked as a masseuse by day and a bartender by night.

Boma suffered depression after his marriage failed and after he sustained an injury during football try-outs. He however determined never to give up and hold on to his faith.