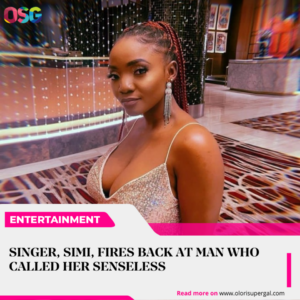 Nigerian singer and songwriter, Simisola Kosoko, better known as Simi has fired back at a man who called her senseless for asking women to hype themselves and forget about being called a c*ck by some people.

“When a man hype himself up, they call him Chairman. BossMan. King.

“When a woman hype herself up, she’s not humble. She’s C*cky.

“Dear woman, you better hype yourself tf up.

“You are very senseless. Why can’t you write without involving men? Why do women like playing unnecessary victim all the time? If you are having issues with your man or someone, you better go and settle it with them and stop misleading our young girls.

However, in Simi’s reply, she fired back at the man and defended herself. she wrote;

“Always f*cking worried about people misleading the “young girls”. The younger girls don’t want to be with your stupid ass.

“They’re the ones even convincing the older girls to be sharp.

“Like I said, Woman hype yourself the TF up”.

Her Instagram story also generated reactions from social media users with the most disagreeing with her post.