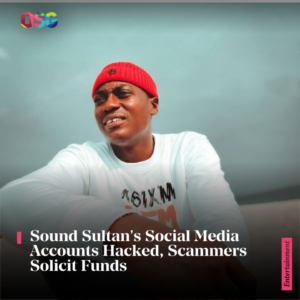 The social media accounts of late veteran singer and songwriter Lanre Fasasi better known as Sound Sultan has been hacked.

According to a disclaimer posted by Farida Fasasi, the widow of the late singer, the family has no control over his social media accounts as scammers have taken charge and they are sending messages to innocent people to solicit funds.

“Hello everyone, Kindly disregard any communication from all Sound Sultan’s social media accounts.

“The accounts have been hacked by scammers sending messages to innocent people to solicit funds.

“Please the family has no control over the accounts.

“Let’s be watchful. Cybercrime is at an all time high. Thank you so much for your support all the way..you would be informed when we have control over the accounts. Farida”.

Recall that Farida broke her silence on Wednesday 11th August, exactly one month after her husband’s death, to pen down a heart-touching tribute to him.