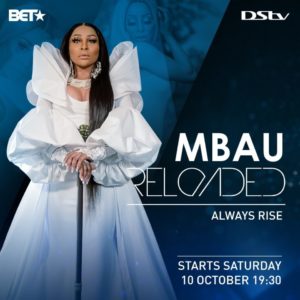 Black Girl Magic reigns on BET Africa as the channel launches its second local reality series this October, Mbau Reloaded: Always Rise headlines the sassy Khanyi Mbau. She describes herself as a piece of art and her body is the canvas. The question is do people know the person beneath the canvas? Viewers will uncover all in the new Khanyi Mbau reality show. Mbau Reloaded: Always Rise is set to premiere on Saturday the 10th of October 2020 on BET Africa DStv Channel 129 at 18:30 WAT.

Mbau Reloaded: Always Rise is the second local celebrity reality TV series to air on BET Africa and cameras will closely follow Khanyi as she opens her life to the world in a never before reveal. African audiences know her from social media, TV, Radio and scandals galore. Never one to shy away from controversy and despite her larger than life personality, the series will delve into whether people really know who she is intimately. Viewers will get to see Khanyi play unique roles in different people’s lives. Underneath the pouting persona with eyelashes for days and poses behind the wheel of a Lamborghini, there is a Mother with no make-up bonding with her teenage daughter at home, a sister and a woman searching for the joy that she hasn’t felt for years.

Monde Twala, Senior Vice President and General Manager at ViacomCBS Networks Africa commented, “It’s inspiring to collaborate with Khanyi Mbau again on the channel that is renowned for celebrating black excellence. Following the success of The Big Secret Season One, BET Africa is proud to continue on its commitment of bringing African audiences local content that is fun, bold and relevant. We continue to grow the channel and focus on content that inspires and elevates black excellence through authentic storytelling that amplifies the richness and nuances of black culture.”

The 13-episode reality show produced and directed by an all-female crew will have cameras closely following Khanyi Mbau as she weighs the juggle between motherhood, sisterhood, family and multi business successful entrepreneur.

Khanyi Mbau concludes, “I am extremely excited to partner with BET Africa again. The dynamic series will give viewers insights into my personal life on so many levels . I am proud to have an all-female crew document, package, produce and share my life with you. Come journey with me, this is Mbau Reloaded: Always Rise”

Main characters in the show will also include Khanyi’s teenage daughter Cannes, elder sister and best friend Thandeka and younger brother who is the heir to the Mcunu clan Junior.