Following the affirmation of Akinwumi Adesina as the President of the African Development Bank, BBC News Africa took to its Twitter page to report the news and tweeted, “Flamboyant Nigerian banker Akinwumi Adesina has been re-elected chairman of the African Development Bank (AfDB) after weathering a political storm over allegations of corruption.” 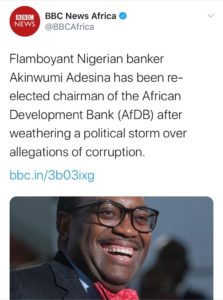 In response, Nigerians condemned the words used by BBC News Africa to describe the AFDB President whose integrity stood out despite the corruption allegations levelled against him.

See some of the reactions below:

In all of this AfDB crisis. Never was his fashion or lifestyle in focus. You had the chance to choose from brilliant, high performing, charismatic, etc. But no, you had to choose a word that has no relevance & only takes away from the subject – his integrity & victory. Very Low.

You described him as 'flamboyant' when he was accused of corruption and we came for you. We saw your bias then.

This second use of 'flamboyant' is so we assume there's nothing wrong with that first description? Well, there is!

Your coverage of Adesina reveals your implicit bias, and you really need an editorial check. You are, quite frankly, a disgrace!

BBC Africa, this is shameful and below par for every reasons.

»»» What’s the “flamboyant” doing with “allegations of corruption” here?

We know you hate that he got re-elected, thank you for showing it.

Western media always portraying us in a bad light. Not even our best is good enough. We have our struggles but some of us work so hard and strive to make it better for us and the rest of the world in our little ways.

Adesina is one of our best. Stop belittling him.

Who signed off on this? This is far from BBC standard.

2. “Banker” is hardly the way to describe his professional life.

Or are you people now into parody ni? https://t.co/IoHzIWpN8n

When will you stop this misleading headline! Same word you used during his investigation/trial.
I know flamboyant could be a positive word (bold and audacious), but reading the content of your previous headline shows that wasn't your implied intention.