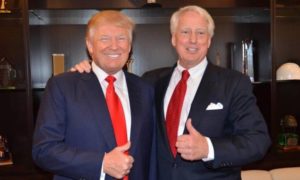 This was announced by Donald Trump in a statement which reads as follows, “It is with heavy heart I share that my wonderful brother, Robert, peacefully passed away tonight. He was not just my brother, he was my best friend. He will be greatly missed, but we will meet again. His memory will live on in my heart forever. Robert, I love you. Rest in peace.”

The cause of his death is yet to be known.

Kate Henshaw Laments About How Uncomfortable Covid-19 Test Can Be