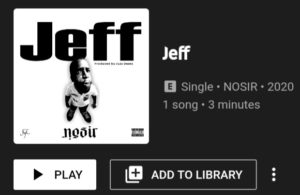 Nosir, under the umbrella of the Spade Gospel Entertainment, has released a new song titled ‘Jeff.’ The song, which is a musical satire talks about a child man, ‘Jeff’, who is only a child but physically attractive and knowledgeable. The song talks about these attributes make him susceptible to sexual abuse.

When asked about what inspired him to write the song, he said “The world right now is going through harsh social and economic conditions and I just wanted to create a song that is fun and also speaks to one of the ills of the society – child abuse.”

The song is available for listening on YouTube Music, Apple iTunes and Apple Music.