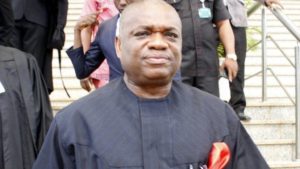 There has been an ongoing fraud case against the former Governor of Abia State, Orji Uzor Kalu, who was convicted of the corruption allegations levelled against him to the tune of N7.56 billion by the Federal High Court.

The Economic and Financial Crimes Commission (EFCC) had reacted to the Supreme Court’s verdict in a statement by Dele Oyewale, the Head of Media and Publicity, as he stated that the former Abia State Governor has not been released and therefore, the body will make further steps to re-try the matter before another judge because of the overwhelming evidence against the former Governor and his aide.

He also said “the EFCC considers the judgment of the apex court as quite unfortunate. It is a technical ambush against the trial of the former governor.

“The Commission is prepared for a fresh and immediate trial of the case because its evidences against Kalu and others are overwhelming.

“The corruption charges against Kalu still subsist because the Supreme Court did not acquit him of them. The entire prosecutorial machinery of the EFCC would be launched in a fresh trial where justice is bound to be served in due course.”

CORONAVIRUS: WILL NOLLYWOOD BE AFFECTED?

PRESIDENT BUHARI APPRECIATES INDIVIDUALS AND ORGANIZATIONS FOR THEIR CONTRIBUTIONS

PRESIDENT BUHARI APPRECIATES INDIVIDUALS AND ORGANIZATIONS FOR THEIR CONTRIBUTIONS