The Camon 12 Series, which is the 6th generation of TECNO’s camera-centric series, appears to be changing the narrative as all devices in this series come with many visible upgrades when compared to other Camon devices. The popularity of the Camon Series cannot be questioned. At least seven (7) in every ten (10) mid-range Android Camera phone is a Camon phone.

While the Camon 12 Pro and the Camon 12 spot a first of its kind Triple AI Max rear camera on a Camon device, the Camon 12Air takes it a step further as the first TECNO device with a Dot-In Display.

The device has an amazing look and feel that his patterned after the colourful aurora lights visible in the Northern and Southern hemispheres of our planet. This reflects beautifully under light conditions and is introduced to the market in two colour variants Ocean Blue Gradient, Alpen glow Gold Gradient, which gives buyers an open list to make their choice from when in the market to buy a device.

The Tecno Camon 12 Air features a 6.55 inch display with a screen resolution of 720 x 1548 pixels and a pixel density if 403 PPI, which makes it larger than the other devices in the Camon 12 Series. 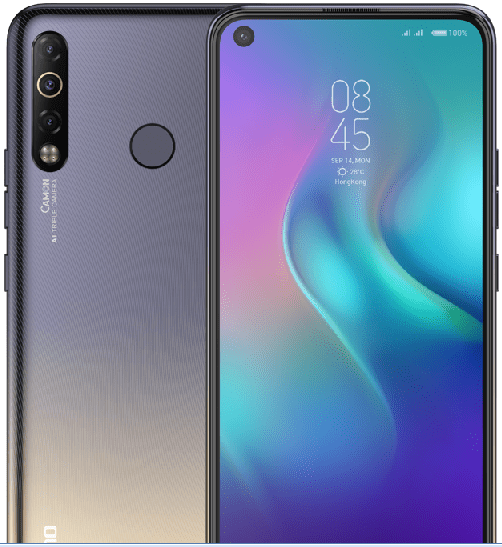 Particularly, the Dot-In Display of the Camon 12 Air places the Selfie Camera of the device on the left side of the device, which makes it the first of its kind on any TECNO phone to come with this upgrade.

This gives a potential user of the device a lot more screen ratio when playing games or watching videos on the Camon 12 Air, as the device screen is only open by its impressive 8MP Selfie Camera, which captures amazing Selfies using its on-screen flash as against the dual flashlight present on the Camon 12 and 12 Pro.

In terms of storage, the device comes with 3GB +32GB and can be expanded up to 128 GB storage and a very durable 4000mAh battery, which promises to last its user a longer usage time after a single fast charge.

Worth mentioning is that the device is powered Mediatek’s Helio P22 Processor, with a processing speed of 2.0GHz, which makes possible everything smart and you do not have to get scared about the device getting hot.

The most intriguing thing about the Camon 12 Air, is the fact that the device sells at a very user-friendly price of N42,500 which is very impressive. TECNO keeps showing that they truly care about Nigerians.

2019 ELOY AWARDS SET TO HOLD ON NOVEMBER 24, PROMISES TO BE A NIGHT OF POMP AND PAGEANTRY

2019 ELOY AWARDS SET TO HOLD ON NOVEMBER 24, PROMISES TO BE A NIGHT OF POMP AND PAGEANTRY